Donald Trump glided into his first week in office from a poorly rated transition into a record low approval, which continued three weeks into the job. RealClearPolitics started his average with a couple of polls on January 23 at 40 percent approval to 45 percent disapproval.

After three weeks, both numbers have increased, and on February 10 he had 44 percent approval to 50 percent disapproval. 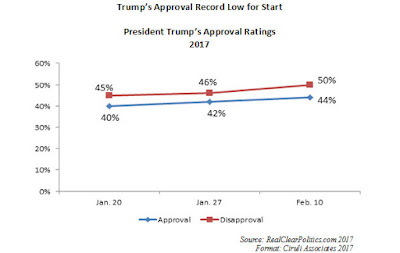 Gallup, which tied Trump at 45 percent for both approval and disapproval in their first poll posted on January 23, pointed out that he is the first president since polling began tracking approval in 1953 (Eisenhower) to be below 50 percent. However, Gallup points out that Trump has his supporters, especially among whites (56% approve), 65 years and older (53%) and Republicans (90%).

Gallup numbers have gotten significantly more negative as the administration has progressed. Trump has lost 15 points in three weeks. Gallup now records 55 percent disapprove (10 points down from 45%) and only 40 percent approve (5 points down from 45%). He will govern as he was elected as a plurality president in a polarized era of low trust for most institutions.

Trump is incredibly sensitive to audience data, including crowd size, polls and approval ratings. He receives it, reviews it, picks what he likes and claims what he doesn’t like is rigged.

Will Germany Have a New Chancellor?

German parliamentary elections on September 28 will either renew Angela Merkel’s 11-year chancellorship or put Martin Schulz and his left-green coalition in the chancellery.

Merkel remains the frontrunner to put a governing coalition together, but the entry of Schulz as head of the Social Democrat Party (SPD), the second largest in Germany and part of the current ruling coalition, makes the election much more competitive. The latest polls show that, in terms of personal popularity, Schulz matches Merkel. Her advantages has been that her party, Christian Democratic Union (CDU), would receive a third of the parliamentary vote, and hence, be the largest bloc, a superior position to form a new government. But polls in the last few days show the two parties equal.

Both candidates support the EU and German membership, as does the public and elite opinion. But the super government in Brussels has taken two shocks with Brexit and the election of Donald Trump. On April 23, a Eurosceptic could win the French presidential election, which could be a fatal blow to the European experiment. But the entire year will likely see hostile campaigns and references about the EU from elections in the Netherlands and possibly Italy and regularly from Trump. Merkel’s problems include some general disapproval of her handling of the refugee crises, the rise of a farther right party, AfD, which has won some local elections and Schulz’s high- profile attacks on Trump, which is uniting the left and attracting some in the disaffected center. 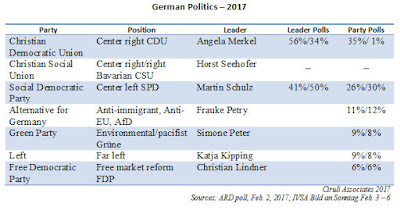 Germany has greatly benefitted from the post-war era of a peaceful, unified Europe. It now dominates the continent’s markets and has little military cost due to the NATO alliance. But its center parties are still in some stress. They have shown weakness in recent state parliamentary elections and the political landscape has fragmented. Despite Germany’s main party’s commitment to Europe, questions abound.


In general, can Merkel and the German center continue to benefit from the EU, or is the new nationalism in control?

Gathering Around the Resolute Desk

On Saturday, January 28, Jonathan Ernst of Reuters captured the Trump team dealing with their first of many crises – the travel ban against seven countries.

It was a busy weekend dealing with an issue that has now taken over the administration’s media coverage. 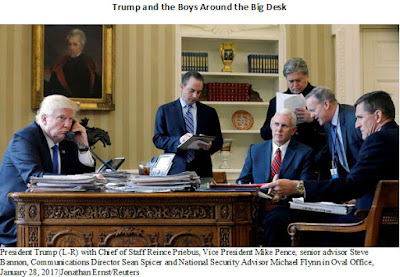 Getting in the Picture

Everyday there is a new photo op and a new battle to get in the picture. Priebus likes the far left position behind the boss and Bannon the far right. Typically, Conway and Kushner fill it.

Even Donald Trump is nervous about the seeming chaos and has given Priebus more authority. Will it hold against the agendas of Trump’s team – dismantle the conventional governing norms, challenge the American and global establishment, and create a new nationalist alignment of global politics? 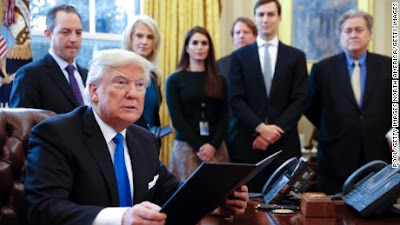 Read:
The Week: Is Reince Priebus back in Trump’s good graces?
The New Yorker: Steve Bannon and Reince Priebus’s war for the White House
Posted by Floyd Ciruli at 11:18:00 AM No comments:

The first seven days into Donald Trump’s presidency were a whirlwind of activity. By last Friday before 4:00 pm and his poorly executed immigration order, he had introduced 13 executive actions. Each signing in the Oval Office at a clear and polished desk produced drama and attracted the undivided attention of the national and regional media.

It was smooth sailing until Friday evening with Trump effectively arguing that he was fulfilling his campaign promises and that people had no patience for the slow pace and lack of action in Washington.

Although some of the actions rapidly produced resistance, such as changing Obamacare operations, dropping out of the Trans-Pacific Partnership, and the opening salvo on the wall and who would pay for it with Mexico, Republicans stayed with him.

It wasn’t until Friday evening that the shock and awe of the first seven days turned into a full-scale resistance after the immigration order. But, the White House team appears to be savoring it all.


Read The Christian Science Monitor: Bannon and his outsize role: He’s not the first to wield so much influence
Posted by Floyd Ciruli at 11:08:00 AM No comments:

WorldDenver hosted seven international leaders January 23 who had just attended President Trump’s inaugural and were anxious to discuss the implications for American politics and the impact on their countries.

I presented a talk on the attraction of populism and its anti-establishment themes for Western Democracy. The Western European representatives were very aware of it (Poland and France were represented). But populism, in their view, is a worldwide political phenomenon. 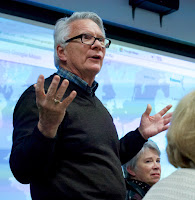 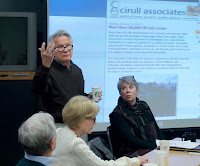 Post-truth and fake news were the topics at a Colorado Water Congress panel with Vincent Carroll and Joey Bunch. Carroll is the former editorial page editor of both the Denver Post and Rocky Mountain News and still writes guest editorials for the Perspective section of the Sunday Post. Bunch, former Post reporter, is now with the Colorado Springs Gazette’s statewide political blog, Colorado Politics.

Bunch pointed out that dealing with a polarized news environment and fake news requires the news consumer to be more purposeful than in the past and roam across news sites and the political spectrums. It takes more effort to ensure the reported news is truly of the significance and has the meaning that’s been attached to it.

Carroll believes that national news organizations will continue to be healthy and Washington D.C. rich with a full range of opinion. But, he lamented the reduction from 500 to 100 working reporters for regional news in Denver. It has been a loss that reduces the coverage of local government and investigative news.

He also made the observation that, to some extent, Donald Trump became president because he violated the news norms of politics. He was unscripted, unconventional and unmanaged. Many people like his politically incorrect banter with the media.

I observed fights between Trump and the media that broke out at various times during the campaign have since the inaugural become a full fledge battle. The President regularly calls reporters “the most dishonest people in the world” and labels new reports and news agencies he doesn’t like “fake news.” And major news outlets daily label the President’s statements as false and without evidence.

This war will not diminish. Trump loves coverage and believes he needs to tweet to bypass the “dishonest press.” Much of the country’s press establishment believe he is unfit for the office or is enacting not just bad, but dangerous policies. They are going to stay on the beat. And both are going to stay in the fight.

In the first round of the French Presidential race on April 23, candidates claiming to shake up the political establishment from the far right to the far left dominate the field. Even the two main parties, the Socialist and Republican (right), rejected candidates associated with center and status quo views and chose outsiders with very conservative or very liberal views.

The top two candidates on April 23, assuming one of them doesn’t receive half the vote, will compete in a run off on May 7.

A new poll published February 1st shows the independent Emmanuel Macron ahead of François Fillon, the conservative frontrunner due to a late breaking scandal involving payments to Fillon’s wife.

In recent elections, French polls have tended to capture the party and candidate alignments with reasonable accuracy, but the environment is more fluid today with more independent candidates, some of whom are just becoming nationally known. Also, the populist, nationalist surge reflected in Brexit and Donald Trump’s victory is a wildcard in the race.