Less than one week out, four candidates in the French election (April 23) are within the margin of error of making the first round. Since early March, the two frontrunners have been Marine Le Pen (22%) and Emmanuel Macron (23%). They remain locked in a tight race (see French Election-First Round Tie, April 10, 2017).

But ex-communist, nationalist candidate (both anti-German and anti-EU), Jean-Luc Mélenchon, has moved into a tie for third with François Fillon, the right of center candidate burdened with an unfolding family patronage scandal. Both are only four points behind the frontrunners. More than 30 percent of the electorate may not vote or was undecided on April 19, two days before published polling must cease. 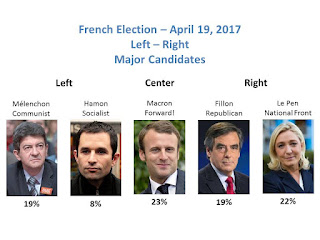 Two weeks after the Sunday vote, May 7, a runoff will take place with most polls showing that in hypothetical face-off Le Pen loses to whoever joins her after the first round. 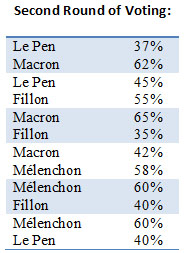