Is Trump Losing Drudge and Rasmussen?

That represents a historic low for Rasmussen, which, due to its sample selection technique, has approval numbers several points more positive for Trump than the average approval maintained by RealClearPolitics.com. Trump usually cites Rasmussen and criticizes all other polls as fake news.

But even more startling than the poll is it was posted by Drudge. A frequent guest at the White House, rumor has it he’s disappointed by the lack of progress on several fronts. Expect Trump and his team to become even more solicitous of Drudge concerns.

What Trump and Republicans should be most concerned about is that not only is Trump’s average approval by most polls now below 40 percent, but even his favorite pollster has him collapsing from 56 to 41 percent since the inaugural. 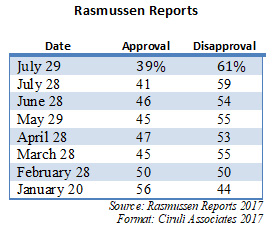 Read The Buzz: Trump is the 40 percent president
Posted by Floyd Ciruli at 4:25:00 PM