Trump Approval Should Pop Up

Donald Trump is having an overdue good week. Presidents and governors who handle weather crises benefit; they even get extra benefit when the damage is less than expected.

The public loves bipartisanship and is desperate for some action in Washington. His “Chuck and Nancy” moment has been well-received, especially by legacy media, which at the moment, he doesn’t believe is fake.

Hope for a tax cut increased slightly this week, along with the market and investor optimism. Trump appears to be staying focused on it. 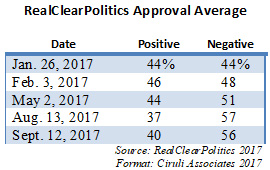