Mueller is Political, Not Legal Challenge for Trump

The political environment of the Trump administration will change dramatically in 2019.
The President believes the Mueller investigation is not a legal problem, but a political issue to manage with his usual public relations tools. Although he could be indicted by the House, the Senate is unlikely to convict and the Justice Department will not charge him with a crime. Hence, his goal is to simply discredit it. However, after more than a year of political effort, he has not been successful in muffling, sidelining or damaging the credibility of the investigation. In fact, some polls indicate he’s losing ground in his effort to discredit Mueller personally, his staff and the investigation in general.

Trump’s main problem is that his believability has declined dramatically with all but his most committed supporters. His reputation for lying is now well-established and it makes his witch hunt claims against the investigation ring false with six out of 10 Americans. When asked in a USA Today/Suffolk University poll, 59 percent of the public offered “little or no trust” for Trump vs. 53 percent who said a “lot or some trust” for Mueller. 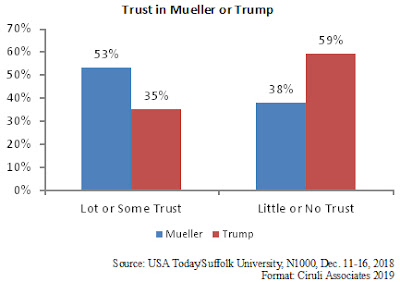