Representative Shintaro Ito is one of Japan’s most influential leaders on foreign affairs. He attended Harvard and is a close observer of U.S. politics. In a recent conversation, the topic turned to the longevity of Prime Minister Shinzō Abe’s premiership and the changing techniques of communicating to the electorate.

Ito pointed out that it was an advantage to have a long-serving prime minister during a period of considerable disruption and danger. Japan has had a succession recently of briefly serving premiers.

Concerning support for Abe, a recent article observed that the Abe government was stronger with younger than older voters, a surprise for most observers. The conventional wisdom is that the LDP (Liberal Democratic Party) is most supported by older and less urban voters.

Ito was aware of the support of voters in their 30s and under. He felt it was related to the government’s support for programs to help parents and younger voters, such as with more nursery space, free preschool, and subsidies for high schools and college tuition.

But, he felt the most important aspect of the LDP’s success was using the internet to communicate to younger voters. A major effort has been mounted to use websites, videos, infographics, blogs and Twitter to engage voters in their 20s and 30s. Abe, in particular, is active in using social media to describe his vision and programs.

One of the major challenges has been reassuring the public that the economy is growing, tourism is up, jobs are available for graduates, and major problems, such as the aging population, are being addressed. 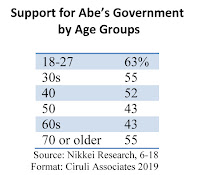 Prime Minister Abe is about to become the longest serving prime minister, and Ito points out that the future of the party must rest on support among new generations of voters. So true.
Posted by Floyd Ciruli at 2:47:00 PM