Denver Voters State Their Views: No Camping, No Olympics, But Yes on Mushrooms

In the latest Denver elections, less than half of Denver’s registered voters have made a series of important decisions for the city and its political leadership. In a nearly unanimous voice, they said any solution to the growing homeless problem will not include camping on city streets, in parks or public spaces. Eighty-one percent of voters defeated a homeless advocate initiative to legalize public camping.

On the same May 7 ballot, voters approved by a mere 2,000 votes, decriminalizing the use of psilocybin, commonly referenced as Magic Mushrooms – cementing Colorado’s and especially Denver’s image as a national drug capital. 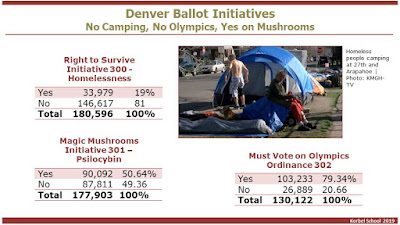 Although the likelihood Denver will ever get a Winter Olympics is highly remote, opponents, including former Governor Dick Lamm, captain of the 1972 statewide voter rejection (by 60%) of the ‘76 Olympics, won another bar to a future Olympics by requiring a vote that would have to take place for even a preliminary study of the issue if it involved any government funds. Olympics, forget Denver.
Posted by Floyd Ciruli at 1:11:00 PM