When Mitt Romney got a standing ovation at a University of Denver presentation (Feb. 28, 2020), it was clear his vote on impeachment was popular with a large, well-educated university audience. And indeed, a new Gallup poll shows his popularity is now greater among Democrats than Republicans.

More specifically, Mitch McConnell’s favorability rating is up 6 points since October 2019 and Nancy Pelosi’s unfavorable rating is up 5 points. 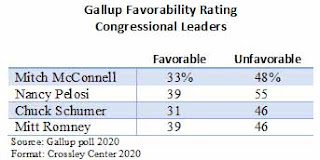 Romney’s 39 percent favorability rating is the same as it was in October 2019, but it is much higher among Democrats (55%) than Republicans (21%), with a 69 percent unfavorability rating. It represents a significant shift between the parties since Romney’s February 5 impeachment vote.