It is significant that Joe Biden’s first visit to a department was State. He wants to revive America’s diplomats and make diplomacy the centerpiece of the country’s foreign policy. Also, he spoke to the importance of supporting democracy worldwide.

“…American people are going to emerge from this moment stronger, more determined, and better equipped to unite the world in fighting to defend democracy…” and counter those “advocating authoritarianism.”

It is a timely shift. Democracy has been on the defensive for more than a decade. The list of smaller countries with fragile political cultures that have backslided on their modest democratic cultures is joined by major powers attempting to aggressively undermine democracy. The U.S. is not at the top of the list of democracies after recent deterioration. 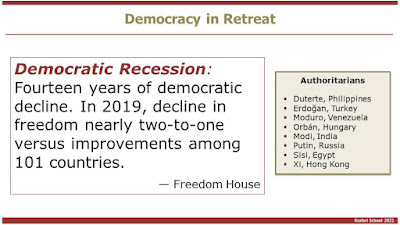 Democracy today is not considered a yes or no condition, but rather a continuum. Many authoritarian countries hold elections, but they lack independent information and competition. The scale involves the examination of elements, like rule of law; pluralism; freedom of speech, assembly and religion; an independent judiciary; free press; and most important, the peaceful transfer of power.

Russia’s goal is to reduce the civic cohesion of the U.S. and Western Europe. China with its wealth, diplomacy and guile actively offers its technocratic authoritarianism as an alternative model for development. It is quashing democracy in Hong Kong and targeting Taiwan next.

Authoritarian countries use state power to silence critics and rivals. Russia has used security agents to poison critics in other countries and arrests rivals within the country. China applies its marketing power to coerce censorship in organizations that want access to its market, for example, the NBA.