Colorado Politics – Could Donald Trump be Heading for Re-election?

Donald Trump made it through 2017 with some accomplishments and a massive amount of disruption of the expected behavior of the White House and the President. No doubt, the show will continue in full force into 2018.

In a column in the state’s leading political website, I discuss if Trump could be headed for re-election.

Rather than speculate about Donald Trump’s re-election chances, audiences at recent speech engagements all seem to have an answer to the same question: Will Donald Trump make it a full four years? The discussion produces considerable anxiety for both his supporters and his many and very vocal detractors.

The following is a running commentary from a slide I use in the presentations on the various scenarios that could sideline Trump before the 2020 election. It also includes possible options in the election itself.

Impeachment. Could he be impeached is asked most often, followed by the likelihood of Trump’s death. Neither is likely. Assuming partisanship dominates the process, the Democrats would need to win the House in the 2018 midterm elections. It will be their best chance since losing it in 2010. If they were to win 24 House seats, they could bring an indictment, but with 67 votes required for conviction in the Senate, it appears a futile effort. Democrats would have to decide if it would be a distraction to their effort to defeat Trump in 2020. Everyone recalls that the major loser in the Bill Clinton impeachment was Newt Gingrich, who lost his speakership in the poor Republican showing in the 1998 midterms. Read more… 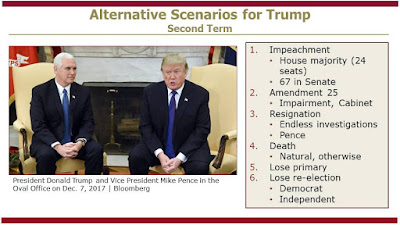