Colorado Politics published my latest analysis of Colorado’s prospects for a new congressional seat after the 2020 census. The decision as to where to place the seat will begin as soon as the reappointment is announced, probably in late 2020. The next governor and likely the new legislature will be involved. More reason for Colorado’s November election to be closely fought.

CIRULI: a new congressional seat for Colorado in 2020?
Colorado’s political parties will be fully engaged in the 2018 election, and not least among its issues of concern is the possibility that Colorado could get another congressional seat. As of now, congressional redistricting is directed by the governor and legislature, and control of both is at stake.

Distribution of 435 congressional districts is governed by the 2020 census count, which is historically drawn on April 1 in decennial years. In 2020, that will be in the middle of undoubtedly raucous presidential primaries in which the census may be an issue. The latest census estimates indicate a congressional district needs about 750,000 residents, up from 710,000 in 2010. Colorado last picked up a seat in 2000, which became the 7th district in the northwest metro area suburbs. Its location was court determined after the legislature and governor gridlocked over the map. Read more… 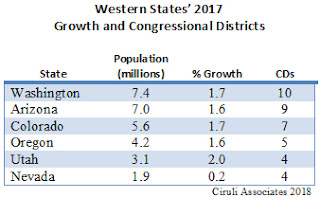