Iraq is the war of the Millennial Generation. No draft, but no victory. And while we left in 2011, the war didn’t end. We are still fighting on the ground and in the air.

In the winter of 2003, going to war was popular. Pew Research reported 71 percent of the public said: “The U.S. made the right decision in using military force in Iraq.” But, the euphoria ended quickly, and by 2005, President Bush was managing a war that had more people saying it was a “wrong decision” than “right.” Republicans were severely punished in the 2006 congressional elections as Nancy Pelosi became the Speaker of the new Democratic Party-controlled House.

Like everything in America, there are stark partisan differences, with 61 percent of Republicans now saying “right decision,” reflecting Republicans generally more martial viewpoint, but also support for a Republican president. Among Democrats, it had been as high as 52 percent in 2014 near the end of Obama’s term when he had to order the military to reenter combat to fight ISIS. Today, only 27 percent of Democrats are offering a “right decision” response. 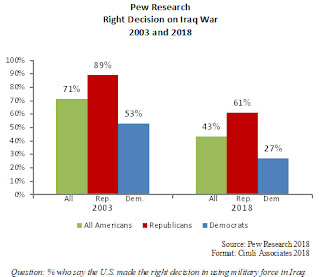