The Buzz asked “Tillerson Gone?” on December 5, 2017. He was fired by a tweet on March 13, 2018. The speculation has now shifted to General John Kelly as it is now clear he has a reduced role in President Trump’s current White House operation.

Trump’s “throw away the script” moment in West Virginia is a part of announcing his new comfort with the job of president after the first year. He’s going now with more gut instincts. The removal of National Security Advisor H.R. McMaster is a part of the new Trump.

The more comfortable Trump is in the job, the less he needs Kelly’s viewpoint or restraint. However, Trump realizes Kelly’s resignation will be seen as a major loss, much greater than Cohen, Tillerson or McMaster – so it must be finessed. Expect Trump to attempt to choreograph a removal that tamps down the criticism as much as possible. 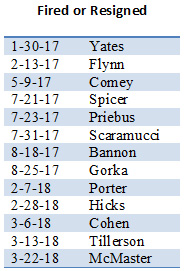 Also see: The Buzz: Tillerson Out
Posted by Floyd Ciruli at 4:08:00 PM