Many large U.S. cities and some states, such as California, have adopted versions of “sanctuary” policies that protect immigrants that the U.S. immigration authorities believe should be deported.

Recently, President Trump, Attorney General Jeff Sessions and conservative media have been excoriating California in general and the mayor of Oakland in particular for sanctuary city policies.

Although the public is very skeptical of Trump’s wall (60% oppose, CBS poll, 3-2018), generally favorable toward DACA (80% support DACA remaining) and supportive of undocumented immigrants having a path to citizenship (support ranges from 60% to 80% depending on wording), it is very divided on sanctuary cities. The President and Republicans know it and believe Democrats will lose on the issue – they may be right.

In a recent CBS News poll, the public is closely divided on sanctuary cities. 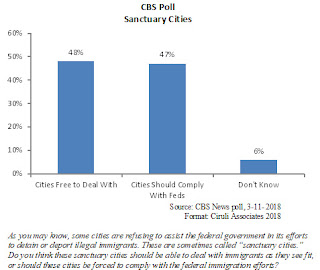 Generally, whenever the conversation turns to crime or criminals, support of illegal immigrants drops. Blanket non-compliance with federal authorities on immigration law enforcement is a risky policy for the Democrats.
Posted by Floyd Ciruli at 3:37:00 PM