KOA: Is Bennet Out?

April Zesbaugh and Marty Lenz asked questions concerning Senator Michael Bennet’s prospects to be in the September debate, and if not, does he drop out?

Make the Stage – No

Although there may be a couple of polls done by August 28 that could be counted, but are not yet reported, it’s impossible for Bennet to make the stage. He’s never registered 2 percent in a national or state poll and he doesn’t have the online contributor goal (130,000). In fact, at the moment in the national polling average, he’s near the bottom and registered 0.5 percent, having missed even 1 percent in recent polls (rounded to 1% in chart below).

Drop Out – Now or Delay?

At least eight candidates are in a similar position to Bennet – should they drop out now or delay the decision? The October debate uses the same rules. They could go to Iowa and wait for the caucus.

Unless something extraordinary happens, the current field will be the group selected from by caucus and primary voters. Bennet must decide when delay becomes a political liability. 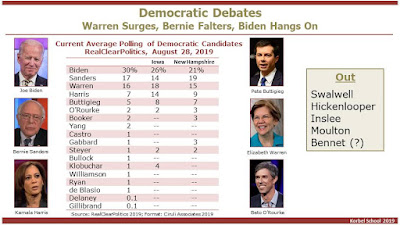 Read The Buzz: Michael Bennet: A Decision is Near
Posted by Floyd Ciruli at 2:49:00 PM