Placement and Polls Structure the Debate

As expected, the July Democratic debates mostly reinforced the positions of the polling leaders. The placement of the top tier candidates between the two nights set the dynamics for the show. Bernie Sanders and Elizabeth Warren dominated the first debate and the topics became the promotion and defense of their left position, especially on health care. The most interesting dynamic was a group of moderates challenging the frontrunners speaking and grabbing some attention.

The “1” percent challengers – Steve Bullock, Amy Klobuchar and John Delaney – all got more than ten minutes. Although John Hickenlooper got a couple of good exchanges, he didn’t engage much. 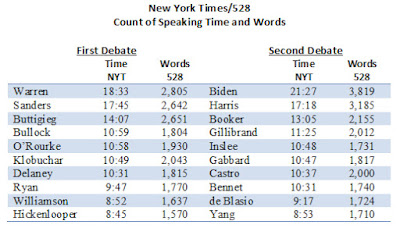 Joe Biden was the dominant participant the second night, with race the main topic, especially for Cory Booker and Kamala Harris. The three of them got the most time, and Biden and Harris spent a major portion of it defending themselves and their records.

Michael Bennet was the only moderate besides Biden, and he challenged the left’s attack on race as focusing on ancient history and not the problems of today. He also criticized Harris and her health care proposal as a dishonest presentation of the cost.

A couple of rounds of national polls are now out, and there was little repositioning detectable due to debate performance.

The debate criteria will shortly limit the field, but the events are having modest impact.
Posted by Floyd Ciruli at 2:45:00 PM