The Democrats will have a spirited contest for their U.S. Senate nomination against incumbent Cory Gardner. It is assumed the winner has a better than ever chance to defeat Gardner in a state that has been trending Democratic in a year Donald Trump’s re-election will dominate politics. President Trump lost the state by 5 points in 2016, and every recent poll and the 2018 midterm reinforce that he could lose by more in November 2020.

Colorado uses a bifurcated system of nominations, with a caucus-convention process and petitioning. In recent years, both systems have been used with party activists dominating caucus and convention, but often more popular, ambitious nominees use petitions. Current frontrunner, John Hickenlooper, will first have to campaign among the 100,000 to 150,000 party activists that have historically participated in the caucus and convention system. If that appears a problem, he could use the petition process. 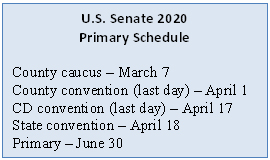 In 2018, both gubernatorial frontrunners and eventual nominees used the petition system, although Jared Polis also participated in the caucus/convention and got 33 percent (above the 30 percent requirement for nomination).

The primary is June 30 next year, which will designate each party’s nominee. Turnout in the 2018 gubernatorial primaries was at record levels due to the participation of large numbers of unaffiliated voters. On June 26, 637,000 Democrats and 503,000 Republicans participated.
Posted by Floyd Ciruli at 1:19:00 PM