As of Thanksgiving, there is no projection that is credibly predicting Republicans will win back the House by gaining a net of 17 seats to deny Nancy Pelosi and the Democrats a majority. But, there are a host of analysts suggesting that Trump could win re-election with less than six states in play, a good economy and the argument presented in his World Series playoff advertisement: “He’s no Mr. Nice Guy.” And, of course, the Democrats may help him with errors in nominee selection or campaigning.

The presidential race appears close in the handful of states that will decide the race. Trump could even lose Pennsylvania (20) and still win the presidency if he holds Wisconsin and Michigan. But, Republicans also are targeting Minnesota, Nevada and New Hampshire.

In the four scenarios presented below, two offer Trump being re-elected and all four have Democrats holding the House. A major variable is the level of Republican dominance in 2021 or Democratic resistance, depending on who wins the Senate. Continued Republican control would offer Trump protection from future impeachment-like attacks, a veto over House efforts to reverse policies in Trump’s first four years and continued direction of court appointments. 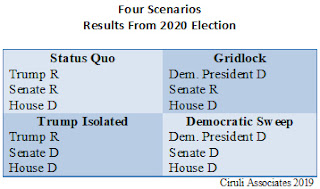 If the Democrats win the Senate, it could be a part of a 2020 partisan sweep, or if Trump hangs on, it would likely lead to massive gridlock in that court confirmations would slow (or end) and presidential initiatives stop. Trump would be left with veto power, but exercising it frequently and the budget would be a potent limiting tool for the Democrats.

To take control of the Senate, Democrats need a net of three seats and the vice presidency or four new seats. Since most analysts hold that they will lose the Alabama seat held by Doug Jones, they, in fact, need four or five seats, depending on the presidency. Many of the competitive senate seats are in battleground (or near battleground) states, and because there is a close partisan alignment between presidential and senate votes, it’s assumed that winning the Senate will be highly dependent on winning the presidency. Hence, Democrats would probably require a strong performance in the presidential race to win seats in states such as Iowa (Ernst), Maine (Collins) and Georgia (2 seats up).

To rate the four scenarios presented – and recall none have Democrats losing the House, which means a Republican sweep is not proposed – the two most likely current scenarios (Status Quo or Gridlock) leave the Senate in Republican hands, but possibly with a smaller margin (from 53-47 to 51-49) and the House in Democratic hands with minor changes. The 17-vote Democratic majority could change, depending on presidential coattails and the survival of a small number of highly vulnerable seats won by Democrats in 2018 or Republican seats that survived the 2018 Democratic tide.

Of course, they have different parties winning the presidency.