Polls on Impeachment Inquiry and Removal From Office
November 25, 2019 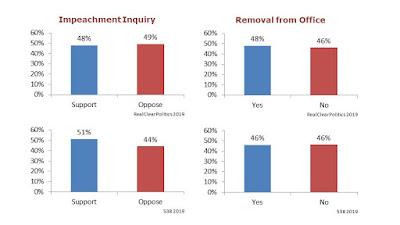 However, contrary to Trump’s view, his popularity is not surging (44% approve in RCP and 41% in 538) and a majority of the public believe he’s committed an impeachable offense (57%) as the many witnesses testified to.

Even without a majority of Americans supporting removal, Trump’s behavior is especially a problem for the House Democrats. The total stonewalling on records and witnesses obstructs their ability to hold the president accountable. In addition, given the offenses go directly to the 2020 election and involve a foreign country, ignoring the issue would legitimize the behavior and likely encourage more, possibly affecting the election.

Democrats also have s significant constituency of educated voters that are highly concerned about the dangers to democracy posed by Trump, Republican tolerance of the behavior and the rise of authoritarianism worldwide more generally.

Impeachments can fail to convict and still have major consequences. Although the 1998 congressional election was won by Democrats, Bill Clinton’s White House behavior was a controversy for Al Gore in the 2000 presidential election. In 2016, Bill’s behavior was used by Trump against his wife, and today, after the “MeToo” movement, Bill Clinton’s reputation is devalued and his usefulness to Democrats over.

The bottom line is that impeachment could harm the Republicans in the 2020 election and have a long-term negative impact.
Posted by Floyd Ciruli at 11:15:00 AM