Military Leadership United for Transition and “In Defense of the Constitution”

American military leadership has united in support of the transition of power and defense of the rule of law and the Constitution. In an extraordinary public display, all former living Secretaries of Defense and the eight members of the Joint Chiefs of Staff have strongly reproached the obstruction of the transition of power. They uniformly accepted the election results and rejected any role for the military in election disputes. 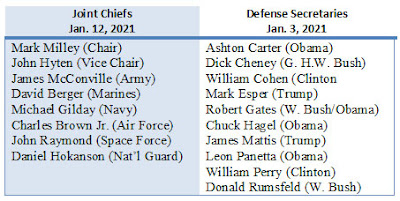 "We witnessed actions inside the Capitol building that were inconsistent with the rule of law. The rights of freedom of speech and assembly do not give anyone the right to resort to violence, sedition and insurrection.

On January 20, 2021, in accordance with the Constitution, confirmed by the states and the courts, and certified by Congress, President-elect Biden will be inaugurated and will become our 46th Commander in Chief."

Read: Are You Impressed We are Depending on Dick Cheney and Donald Rumsfeld to Support and Defend American Democracy?