As described in the blog post, “The Transition Nightmare” (1-8-21), President Trump is losing Republican leadership support due to his behavior before and after the January 6 attack on the Capitol and his failure to help the party hold its two Georgia senate seats.

Not surprising, due to the nonstop media coverage, the early polling shows Trump is losing support with the public in general. He is being blamed for the riot and its harm (63%). A majority of the public support his leaving office now (57%) (even if unlikely given only 9 days to the end of his term). Only 13 percent of Republicans support removal, but 30 percent believe he shares blame for the event. His job approval dropped to 38 percent, 5 points below the 43 percent average he retained since the election, and the Republican Party is losing identifiers, likely due to the drumbeat of criticism for the transition, reinforced by criticism from editorial pages, retired military leaders and business CEOs. 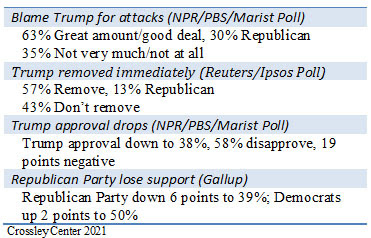