The Boundaries of Recreational Marijuana

A panel of polling experts convened at the national conference of the American Association for Public Opinion Research (AAPOR) and reviewed the shifts in public opinion and successes and failures of marijuana legalization. National and California pollsters were represented. I provided a description of Colorado’s five-year experiment with recreational marijuana legalization and some of the emerging boundaries of public acceptance. 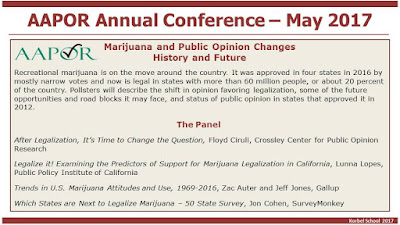 Presentation description:
Colorado is one of the oldest marijuana adopting states. But, acceptance of recreational marijuana is neither uniform nor universal. More than half the cities and counties do not allow retail sales and most of the public does not want expansion of sales.

Each year for a decade, pro-marijuana legalization advocates rallied on April 20 in downtown Denver for a public smoke-in. But as the mayor of Denver and the Denver Post recently said, the party may be over. Their main point is that the drug is legal and a protest rally is irrelevant and counter-productive. The gathering itself, besides requiring strong police presence and park cleanup, reminds a lot of Coloradans what they don’t like about the legalization. Public smoking shows contempt for the law and dramatizes the constant effort to advance more usage. And, of course, the backdrop is that the new Trump administration is hostile to legalization and considering how to step up enforcement. The following editorial appeared in the Colorado Springs Gazette, June 11, 2017, and reflects the AAPOR presentation. 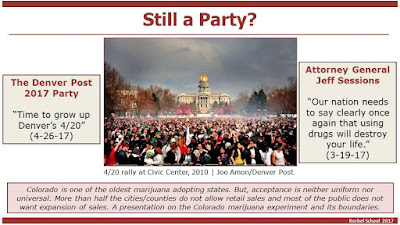 Colorado is often cited as the bellwether of America becoming a marijuana nation. With our legalization of medical marijuana in 2000, and of recreational marijuana in 2012, we helped open the floodgates to what has become a national movement. Continue
Posted by Floyd Ciruli at 11:24:00 AM