Americans Believe Race Relations Have Worsened in Trump Era, But Divided Over Who’s Most Threatened

By 57 percent to 15 percent, Americans believe race relations are worse 18 months into the Trump administration than during the Obama presidency. Respondents rated relations under Barack Obama’s term 38 percent better to 37 percent worse. 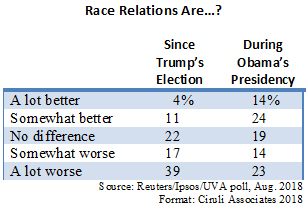 The poll conducted in early August and reported by Larry Sabato for the University of Virginia Center for Politics also highlighted many of the divisions and anxieties about race and race relations that affect Americans. For example, super majorities adhere to American ideals that all races are equal (82% agree), all races should be treated equally (91% agree), and all races should be free to live where they choose (86%).

But, significant portions of the population support some of the “alt-right’s” often expressed positions. For example, America must protect its White European heritage (35% agree) and White people are currently under attack in their county (43% agree). Still, a strong majority support protecting multicultural heritages (82% agree). Also, a larger percentage of Americans believe racial minorities are under attack (57%) than believe Whites are under threat (43%).

Although extremists who trade in these race-based appeals don’t marshal much support (Neo-Nazis – 5% support, White Nationalists – 8%, Alt-right – 7%) – witness the recent Charlottesville anniversary activities in D.C. and Charlottesville – there is a group of Americans who are anxious about the status of Whites and can be politically mobilized.
Posted by Floyd Ciruli at 9:25:00 AM