Health care registers as the second most important issue in numerous surveys just after jobs and the economy, which the public is increasingly satisfied with. It is the top issue for women, and women are a challenge for Republicans in the 2018 midterms. 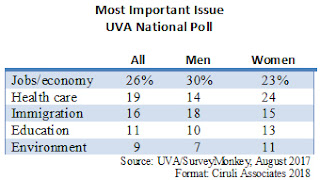 According to a recent CBS News poll (8-13-18), health care ranked first by both younger (18-35) and older women (over 35) when asked what issue will be very important in their vote for Congress. Also, 68 percent of women said the candidate must agree with them on the issue to get their vote. It should be noted that the economy becomes a less useful issue for Republicans as it improves. Health care then becomes a greater interest for voters, especially women.

Health care will be especially important in the Colorado gubernatorial race, with Jared Polis having supported the single-payer “Medicare for All” proposal of Bernie Sanders and Walker Stapleton a strong opponent.

Regardless of pro or con views on single-payer, what the candidates plan to do related to access and affordability of health care may be a deciding issue, especially for women.
Posted by Floyd Ciruli at 9:35:00 AM