In 2018, America’s Two Parties Have a Lot of Stress

About three-quarters of American adults say they identify with one of the two main parties, but only a third say they are “strong” Democrats or Republicans. Two-thirds are either moderate or just lean toward their respective parties. Will America’s two parties survive intact the next two years? The establishments of both parties are in frequent conflict with the myriad of interest groups the parties represent. 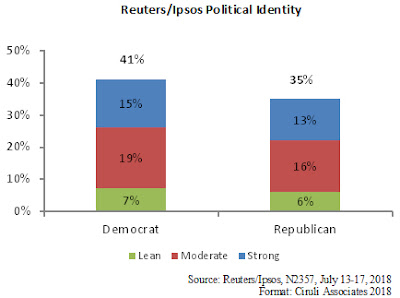 Republican Party coalitions include the Tea Party, evangelicals, MAGA Trumpers and Never Trumpers, ethno nationalists, economic populist, national security hawks, non-interventionist, free trade and establishment Republicans. Many groups overlap, but each group could take a walk if their issue is not well-represented, and some interests are in direct conflict – isolationist vs. internationalists and economic populists vs. free traders. Currently, the most alienated groups are free trade, internationalists and the establishment (often local, state and national officeholders).

Democratic Party stress is currently between the establishment and the hyper-progressive wing, which in 2016 was encapsulated by the Hillary Clinton- Bernie Sanders duel. The argument continues as the party begins to line up its presidential contenders and sort through messages and strategies for the 2018 midterm elections.

Should it endorse single-payer health care, reverse the tax cuts and abolish ICE? Should it focus on winning back the industrial and Midwest or move on to the new South and Southwest?

Although Democrats have the advantage in 2018 due to the midterm sag in presidential party support, some advantage in the number of adherents and the passion opposing President Trump engenders both parties are struggling with unifying for the election. The rule currently being followed is to find some sort of outrage and target it. It will make for an ugly election.
Posted by Floyd Ciruli at 2:44:00 PM