There is good reason to believe Donald Trump is wrong that the Mueller report provides “complete and total exoneration,” which he proclaimed returning from Mar-a-Lago the Sunday after Attorney General Barr’s four-page letter to the Congress (March 24, 2019). It is also clear that he is aware of the problems the report presents as he has backed away from his original position of releasing the report.

President Trump is right to be concerned as a careful reading of Barr’s summary of the 400-page report highlights that there may be ample evidence of both collusion-type activities (but no tacit or express agreement) and obstruction (“It also does not exonerate him”).

The American people appear in early polls to agree there’s more to the story and they want to see the report to get it. 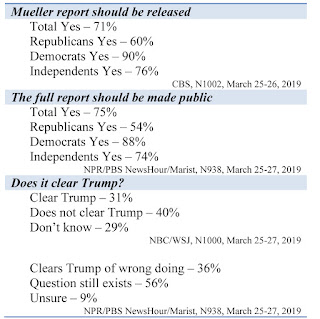