Japan is an economic power – third largest national GDP after the U.S. and China – but it has not projected strategic influence. Prime Minister Abe, his party the LDP (Liberal Democratic Party) and the nation’s foreign policy leadership are changing that. They recognize new circumstances in the last decade have created challenges in the Western Pacific that, if not addressed quickly, will become strategic threats that could harm the nation’s and region’s security and prosperity.

The long period of relative calm in the Pacific has been disordered by the rise of an expansionist China. With vast economic resources and leadership of Xi Jinping, it is revising the region’s power relationships and rules. North Korea, long a repressive rogue state, now has nuclear weapons and a delivery system that could reach Japan and beyond. The new leader, Kim Jong-un, appears determined to change his country’s economic and strategic weakness. But, probably the most unexpected and rapid change has been in the U.S.’s foreign policy under President Donald Trump’s “America First” doctrine. Alliances, including with Japan, South Korea and other Asian nations, have been discounted as they are primarily considered financial arrangements subject to unilateral revocation and accompanied by frequent, if casual, threats of withdrawal.

Japan’s pacifist constitution (war making is prohibited), which has broad public support, will likely remain the dominant foreign policy boundary, but Japanese realists are increasingly redefining it to address the new conditions in the Pacific. Abe’s strategy is to use soft power to build multilateral alliances dedicated to economic benefits with selective, if limited, military applications. So, for example, Abe has picked up the TPP trade agreement discarded by the Trump administration and reconfigured it. He recognizes the U.S. must be a part of the trade and defense strategies and has encouraged the U.S. to rejoin the revised TPP and Japan is taking part with the U.S. and South Asian nations in military exercises. He and his foreign policy team are also looking farther afield for allies, including in Europe, for example Germany, and in the Mideast.

Fortunately for Abe’s timing, Japanese soft power in the Pacific Rim is high. A couple of recent polls show Japan’s reputation exceeds China’s and the U.S.’s in a number of Asian and South Asian Rim countries. It reflects many years of work on soft power with economic development, cultural exchanges and tourism promotion.

A Pew Research survey of last November shows confidence in Abe and positive reviews of Japan in the Philippines, Australia, U.S. and Indonesia. Only South Koreans are negative. 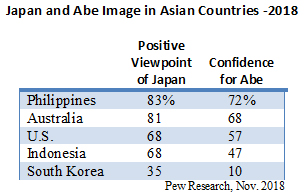 A survey commissioned by Japan’s Ministry of Foreign Affairs in ASEAN member states in February 2018 (3,000 interviews in 10 countries). 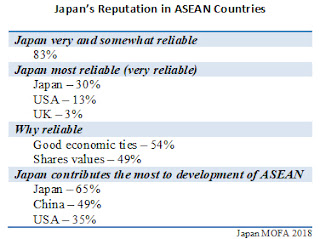 Japan’s leadership sees defense of a rule-based international system and the self-confidence of democratic counties as an important national objective and a responsibility it shares with the U.S. and other allies.
Posted by Floyd Ciruli at 2:49:00 PM