Is Hancock in for a Runoff?

Although no polls have been published, it is clearly a disruptive moment to be running for a third term as Denver mayor. Michael Hancock has been successful by many definitions. The city attracts new residents, the economy is strong and he has passed ballot issues overriding TABOR and approving infrastructure bonds, usually a sign of public support. In the campaign, the most reported metric is fundraising, and Hancock holds a million dollar advantage over his opponents.

In general, incumbents are not defeated. But, there are a few exceptions. The modern era of Denver politics began in 1983 when Federico Peña defeated Bill McNichols, who was going for a fifth term. And, both Peña and his successor, Wellington Webb, had very tough second term re-elections where they lost the first rounds. 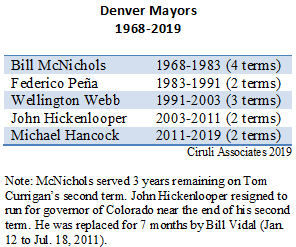 And, there is a sense 2019 will be a difficult year for incumbents. Chicago just tossed out the machine for a political novice advocating change and fighting corruption. Although none of Hancock’s opponents have surged yet, all three are actively campaigning, have constituencies and together only need to hold Hancock to below 50 percent.

Hancock’s biggest issue challenge is growth, which the booming economy has encouraged. He is the establishment and business candidate as the fundraising makes clear. He gets credit for much of what is exciting about Denver, but now he gets the blame for the traffic, gentrification, homelessness and other less welcoming side effects of growth.

Also, like 1983 when Baby Boomers helped elect Peña, the surge of new Millennial voters don’t know Hancock’s life story or his record of service. He’s had to introduce himself with advertising to this new electorate, who ironically represent the growth the public is concerned about.
Posted by Floyd Ciruli at 2:53:00 PM