COVID-19 Deaths
The last week recorded 13,000 victims of COVID-19, up from 55,000 to 68,000. As states begin to open up retail businesses and segments of the public clamor to get back to activity, will there be a spike in cases and accompanying deaths? The public health community is watching closely, especially for the public’s willingness to maintain social distancing, hand washing, masking and other protective measures. Americans have shown compliance with the public health rules, but after a disruptive president, a hostile online subculture and intense economic hardships, the nearly seven-week shutdown is beginning to break down.

The Tension
Every governor is struggling to resolve the tension between the twin towers of pain, how to maintain the maximum safety level of the public, yet get the economy moving and reduce the hardship of unemployment. 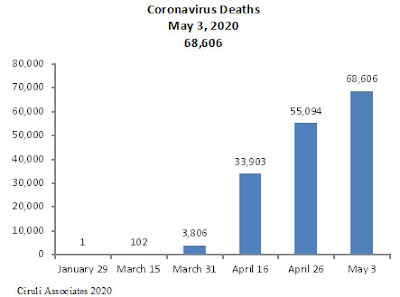 Unemployment
The latest report of unemployment claims of 3.8 million shows that, while the rate of weekly increases has slowed, the total of 30.3 million out of work is extraordinary and historic. It represents more than 18 percent unemployment, a record not archived since the Great Depression.

Some people are returning to work, but economists predict the slow economy will produce a second wave of unemployment among white collar workers who were able to work at home, including government employees and workers in the oil and gas sector. The looming recession, loss of local government tax revenue and the oil bust will cause the next increase.

The president believes the recovery will be swift and fully realized by November for the election – a v-shaped curve. However, if consumers are slow to restart gathering and spending compared to the recent past, the course of the recovery may be a long and only a gradual slope upward. 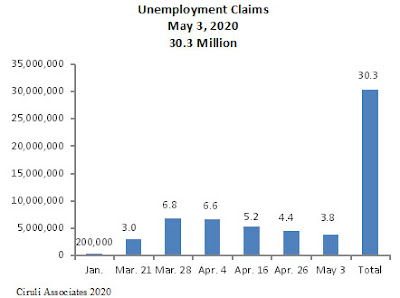