My mother told me stories of her parents feeding people passing through Kansas and Colorado in the 1930s looking for work, many coming from the rail yards, and in the 2008-10 Great Recession, nearly everyone had some financial hard times. But, the latest unemployment rate recorded for the month of April was at 14.7 percent, well beyond the Great Recession and approaching the hardships of the 1930s when one out of every four workers was out of work.

The U.S. Department of Labor reported that 20.5 million workers lost their jobs in April, erasing the jobs gained since the last recession. And, another 6 million Americans were unemployed, but not counted due to not looking for work because they believed they would be called back to their previous jobs. The last time the unemployment rate was this high was at the end of the Great Depression (1940) and before the start of WWII. 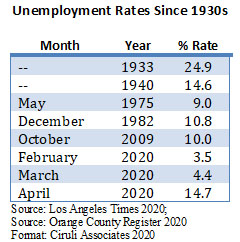 Hospitality and Leisure Industry
Not surprising, the hardest hit sectors are the hospitality and leisure industry, professional services, retail and health totaling more than 13 of the 20 million out of work. The job types not affected are those that require physical presence that can’t be automated. Many are now considered essential, such as food workers, retail sales (grocery, convenience stores), hospital workers and home health aides, often lower paid with fewer benefits.

Unemployment Claims
The weekly report of new unemployment claims continue to decline from the initial high of over 6 million per week to 3.2 million in the latest report. But, it is a sign that layoffs and furloughs continue at a high rate after 7 weeks from the start of the shutdown in the 3rd week of March. 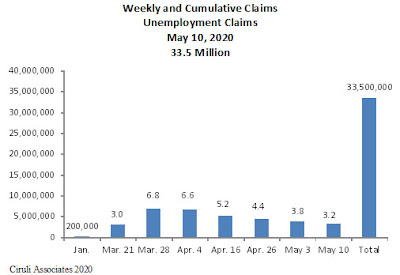 The Wall Street Journal article, “Hope for Speedy Rebound Dim” (5-12-20) captures the growing consensus among economists and the business community that the recovery will be long and difficult. As described in previous blogs on the pandemic (The Twin Towers of Pain series), a host of economic, psychological and health factors will affect the recovery – especially the behavior of consumers, patients, students, office employees, sports participants and others as they assess the risk of various activities. I suggested a recovery in the shape of the letter “L” with a long slope up after the initial drop. The WSJ says some expect a NIKE logo-style “Swoosh” recovery is most likely. In either case, slow and cautious.