Out of a total of 850,000 worldwide COVID-19 deaths, the U.S. just crossed the 100,000 mark, or 29 percent. Although the rate of deaths is slowing (down from 2,000 a day in April to about 1,200 today), there are sufficient infections, some in areas with weaker health care networks, that the number of deaths will continue to grow. Also, as the country opens up, spikes are a concern. May through Memorial Day produced 40,000 deaths. June is likely to have a significant increase, even as the curve in the U.S. levels off. 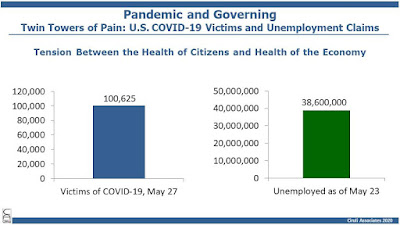 Economy
The last week produced 2.4 million new unemployment claims, increasing the total since the beginning of March to 38.6 million. With the country opening back up, increases in claims should decline as people drop off the roles and return to work. But as the worldwide recession takes hold, even with the end of the lockdown, a slow recovery is now anticipated nearly universally among economists, financial officials and business and another wave of unemployment is likely as businesses adjust to the diminished demand.