New polls are not good news for President Trump. The latest polling headlines tell the story of a presidential campaign in a freefall:


And panic has started to set in after more than 30 days of lagging behind Joe Biden by twice the polling margin of error and nearly three times Hillary Clinton’s lead at this time four years ago. (See Crossley blog: Trump Behind Nine Points for Entire Month)

Republican donors are shifting funds to the senate, recognizing that may be the only wins possible. Republican governors are breaking ranks from Trump and the White House on messaging and strategy concerning the seriousness of the virus, speed of opening up, use of masks and the value of testing. Last week, the President and White House shook up the campaign with a new campaign manager. And Sunday, a supposedly friendly Fox News interview saw a defensive and testy candidate arguing that there is no problem with the virus or polls.

Looking at the National Dashboard, it’s obvious that 100 days from the election, Trump is in serious trouble. His approval rating at 42 percent is in a territory of presidents who historically lost, he’s 9 points behind Joe Biden in the head-to-head. Only 24 percent of the country believes it’s going in the right direction (69% wrong track), and when offered a party choice for Congress, people support the Democrats by 9 points. 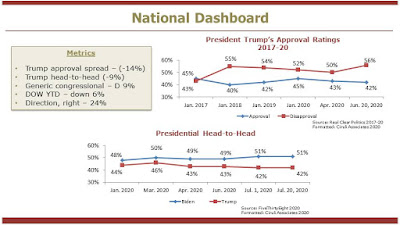 Trump was hoping to ride on a strong economy and a few selected victories, such as trade agreements, his border wall and new judges, into a tight win in spite of a low approval rating and high unfavorability. He was also looking forward to campaign rallies and a challenger unable to handle the barrage of attacks that were waiting for him.

Since early March, nothing has gone as planned and the challenges have not been managed well. His terrible poll ratings are related to the public’s view that he has not handled the pandemic or the crisis caused by the George Floyd killing and the growing perception that America’s race relations need a serious reset. And, of course, the economy is in a recession with depression levels of unemployment and no presidential sense of how to manage, or even awareness of, the obvious tensions between reopening and public health.

As of today, Trump will lose the election as decisively in popular, if not electoral, votes as President Jimmy Carter in 1980 to Ronald Reagan, 41.0 percent to 50.7 percent, respectively. Because of today’s polarization, the electoral vote would likely be closer, but not close enough to credibly claim he was cheated. There is, of course, 100 days to go and things change.
Posted by Floyd Ciruli at 10:34:00 AM