President Trump has settled into a 9-point election deficit as summer approaches its mid-point less than 110 days before the election (see chart below). Trump is also still behind in battleground states, mostly beyond the margin of error. Since I last posted on the election one month ago, North Carolina switched from Trump to Biden by 3 points. The generic ballot shifted 2 points Democrat to a new recent high of 11. Trump fell behind not due to campaign errors since it has barely started, but rather due to the crises conditions with the pandemic, recession and race relations intersecting with the missteps and misstatements by Trump and his governing team. 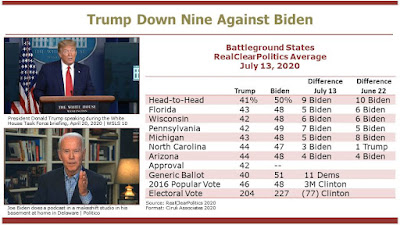 Only a third of Americans approve of Trump’s handling of the coronavirus response, down 8 percentage points since mid-June, corresponding to the collapse of his election position (ABC, June 2020). He just donned a mask for cameras, while 86 percent of Americans say they wore one in the last week. Even 66 percent of Republicans wore a mask in spite of his resistance and politicization of the issue.

Trump’s law and order and “save the monuments” focus without reference to social justice or police reform has been measured and reported as inadequate by the public in a host of national polls. But, his biggest political problem is that the relentless and near obsessive focus on the economy instead of national health has denied him his only asset as November approaches – a strong recovery, which he would claim credit for. Instead, we may have a weak and sputtering economy, which he is being blamed for.

Trump’s and the campaign’s first reaction to the month-long deficit to Biden was to criticize the polls, including those from allies and even campaign vendors. Polling critics frequently reference the 2016 polls and various perceived flaws, such as missing Trump’s passionate army of supporters. Many analysts have pointed out that the 2016 national polls, which were measuring the popular vote, got it right (on average only 1 point off; i.e., Clinton by 4 points, she won by 2.1 points and 3 million votes). And, although the state polls missed the winner in three states, most state polls and the 2018 polls were accurate. But, even allowing all the criticism, the pure volume of state polls today (different than 2016) are confirming and re-confirming the point spread mostly for Biden. Republicans’ claim of skepticism of the polls is belied by their advertisement dollar investment in formerly safe states that now look in play: Iowa, Georgia and Ohio.

But, Biden is remaining cautious in spite of the good news. He continues to focus his campaign resources, especially advertising dollars, into very critical swing states – Michigan, Arizona, Wisconsin, Pennsylvania and Florida – and not further afield, for example, Texas, Georgia or Iowa, which some supporters encourage.