In the last month, California has moved up in the queue of states from tenth place to fifth in terms of deaths from the virus and is likely to move to fourth in another week. In fact, while New York has stabilized its infection and death rates, Sun Belt states, like Florida, Texas and Arizona, are surging. Deaths in the U.S. increased 22,000 to 140,000 since the last time I reported (June 16). And although the death rate has slowed due to better treatments and younger, healthier patients, the impact on the reopening of retail has been dramatic with numerous states either slowing further openings or reducing current customer access to bars and indoor dining. Sports and schools are also pausing or seriously pondering their efforts to get back into the arenas and classrooms. 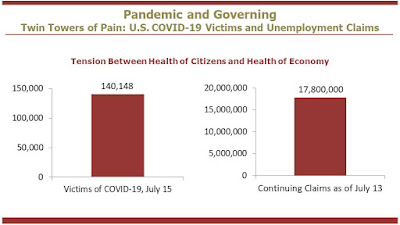 Unemployment claims continue to climb even though total unemployment and the rate are going down causing economists to believe the recovery started, but is endangered by new layoffs and bankruptcies caused by the continued pandemic, the exhaustion of federal relief funds and the worldwide recession. Since the pandemic started in March, 48 million Americans have filed for unemployment, 6 million a week at first. Although it’s now down, it stubbornly remains above one million new claims (July 3 – 1.4 million, July 10 – 1.2 million more). Unemployment claims pre-pandemic were 200,000 a week. Continuing claims has declined slightly to more than 18 million. The unemployment rate in June dropped to 11.1 percent, down from 13 percent in May (16% in April), In June, 4.8 million workers returned to their jobs, bringing the total unemployed down to 17.8 million from 22.6 million.

The recovery is now seen as not a letter “V” or a “swoosh,” but more of a chainsaw of up and down motions with days and weeks of recovery, followed by periods of layoffs and slowdowns. The ongoing problem is the failure to contain the eruptions of the virus or manage the outbreaks well once they happen. Medical facilities in many places are still in distress. But, that is only part of the problem. The consumer that drives so much of the economy is still extremely cautious about going back to full previous activity. In addition, there are patterns of purchases and lifestyles that may be changed for the foreseeable future, especially related to leisure activities.