Joe Biden’s focus on the virus and general effort to lower the temperature in Washington are getting favorable reviews in the polls and with the public. As of March 1st, slightly over 30 days into his presidency, Biden is holding his approval level at 54 percent, one point down from his opening approval on January 28 of 55 percent. Disapproval moved up from 37 percent to 40 percent. Four years ago at this point, Donald Trump’s approval was 10 points lower (44%) and disapproval 10 points higher (50%) in the RealClearPolitics average. 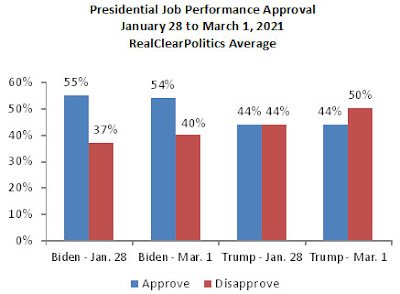 Numerous polls show Biden’s relief package is a high priority for the public and highly supported. One interesting new poll of battleground state swing voters (Arizona, Florida, Georgia, Michigan, Nevada, North Carolina, Pennsylvania and Wisconsin) reports 66 percent are concerned government won’t do enough in the relief package and 72 percent want to help as many as possible as quickly as possible. The poll notes that it doesn’t affect their level of approval if Republicans don’t support the legislation. Voters want Biden to treat Republicans with respect, not necessarily defer to their viewpoint.

As of now, Biden is winning with the relief package without Republicans.