Joe Biden begins his presidency with a 55 percent approval and 37 percent disapproval, an 18-point positive rating. How long it lasts in today’s polarized environment is a question. Biden benefits from two public opinion influences since the election. His transition effort has been judged very favorably – mid-60 percent in numerous polls, and Donald Trump’s behavior has been a disaster with the public. 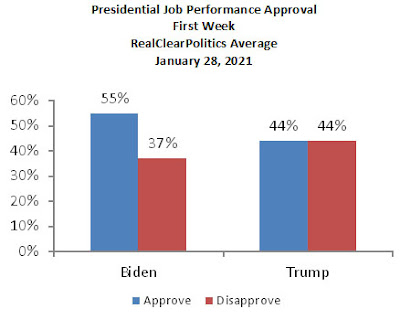 Also, good news for Biden is that he starts 11 points higher than when Donald Trump began in 2017. Trump’s approval and disapprove were tied at 44 percent according to RealClearPolitics. His approval dropped to 40 percent by April 1, 2017 and disapproval soared to 53 percent (-13 points). His approval never exceeded 50 percent in his 4 years. His low was 37 percent in December of his first year and his last year average was 44 percent. His final approval was even worse than his starting week at 39 percent according to 538 and 41 percent in RealClearPolitics.