Biden Has a Honeymoon

President Trump never had a honeymoon with the public as he took over in January 2017. But, most presidents begin with positive ratings, and a new CNBC economic survey shows Joe Biden starts his presidency with 62 percent approval, 18 points ahead of Trump (44%) at the same time in his presidency. CNBC compares the three most recent presidents’ post-inauguration polls and their December first year polls. The message is that approval can change dramatically. Interesting, Trump’s approval started and stayed low, but it seldom changed much. He had a low ceiling and high floor. By April of his first year, his disapproval jumped from the mid-40s percent to about 55 percent, where it tended to remain for four years. The following is commentary on four presidents’ approval ratings their first years. 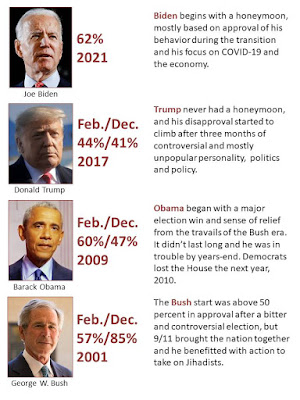