With the endorsements of Elizabeth Warren, Barack Obama and Bernie Sanders, Joe Biden now has a unified Democratic Party in terms of top leadership, many of whom campaigned against him. The disparate constituent groups in the party are not necessarily unified and many are lacking enthusiasm, so Biden and the party still have much work ahead.

Although national polls give Biden a lead in head-to-head tests, many remember Hillary Clinton’s national lead of 4 points or more throughout the 2016 campaign. Indeed, the current consensus is that the election will be closely battled in ten or less states. Today’s polling averages show the race in key states in the Electoral College is tight. 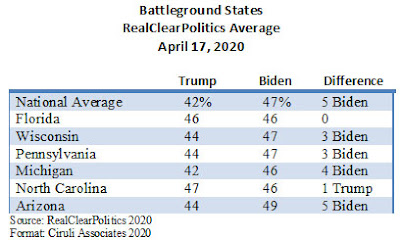