As the post Memorial Day campaign season begins, presidential campaign metrics haven’t moved much the last 30 days and President Donald Trump remains in trouble. The most recent national polls as aggregated by RealClearPolitics has Joe Biden ahead of Trump by 5 points, one point below the spread on April 28, the last time I reported the data.

During the 30 days, Trump ended his participation and the media coverage of the widely panned Coronavirus Task Force press conferences and began road trips to battleground states – Arizona, Pennsylvania and Michigan. His nonstop emphasis is on starting the economy, which has indeed begun opening, if at different rates and still with considerable public caution.

Battlegrounds
The President, his campaign and his political allies, especially in the Senate, are also facing difficult numbers in battleground states. Trump is currently behind in Florida, Wisconsin, Michigan and Arizona. He’s ahead in North Carolina by only one point. He has lost ground during the last month in both Michigan (was down 4, now down 5) and Pennsylvania (was down 3, now down 6).

Senate
Mitch McConnell and his leadership team are increasingly concerned about their senate majority. Colorado incumbent Cory Gardner is down more than 10 points in repeated polls, including a recent online survey where he was down 18 points. Arizona incumbent Martha McSally is behind 9 points to challenger Mark Kelly. Susan Collins is behind in Maine by 3 points and Thom Tillis in North Carolina by one. 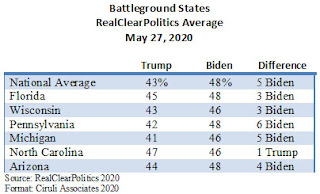 Generic Vote
The final metric that causes concern to the Majority Leader and his colleague in the House, Minority Leader Kevin McCarthy, is the generic ballot tests that continue to show the Republicans 8 points behind in both RealClearPolitics and 538 (48% to 40%). Republicans were behind by 7 points in late October 2018 just before they lost 41 seats and control of the House.

Of course, it’s early. Conventions need to be held. Colorado still has a primary, but when so little has moved the last month, the numbers appear to show strong tendencies and the Republican Party is beginning to worry.
Posted by Floyd Ciruli at 12:54:00 PM