President Trump, when he activated his re-election campaign after Memorial Day, was down five points to Joe Biden (May 27, 2020). Today, one month of campaigning later, he’s down ten points and behind by 4 to 8 points in key battleground states (see table below). Notice Trump lost 2 points nationally and more in the key states in the last five days. 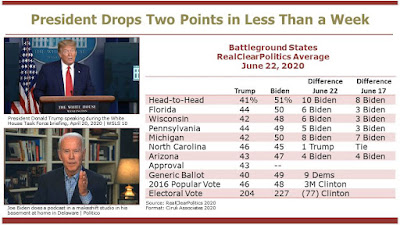 His shift from the health concerns of the pandemic to the economy has been highly publicized and highly criticized due to increases in infections and hospital admissions in several states. But even more damaging has been his reaction to the George Floyd killing and the ensuing national protests. Trump’s opening declaration on June 1 at the White House was: “I am your President of law and order…” and then berated governors for not using the National Guard to “dominate the streets”. He then announced he was: “…dispatching thousands and thousands of heavily armed soldiers, military personnel, and law enforcement officers to stop the rioting, looting, vandalism, assaults, and the wanton destruction of property” in Washington, D.C.

With his top team (Attorney General William Barr, Secretary of Defense Mark Esper, Chairman of the Joint Chiefs Mark Milley, National Security Advisor Robert O’Brien, senior advisors Jared Kushner and Ivanka Trump, other advisors Hope Hicks, Mark Meadows, and Press Secretary Kayleigh McEnany), Trump had Lafayette Park cleared using the assembled forces to march over to the St. John’s Episcopal Church for what was widely labeled as a photo op with a bible. His law and order approach and now infamous walk were the most well covered events during the month and they hurt.

The latest Fox News poll shows that, not surprising, the three biggest issues that the public sees as a threat to the U.S. today are the economy, the pandemic and racism. It also shows Trump’s behavior narrowly winning approval concerning the economy, but judged poorly in health care and race. Finally, in a new Quinnipiac survey, 60 percent don’t approve of his handling of the White House protestors and he loses to Biden on doing a better job on coronavirus and race relations.