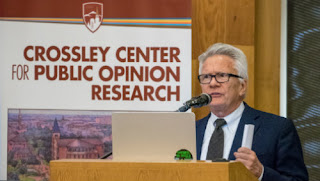 Is the Race Over?

One of the best questions at the Arvada Chamber of Commerce Leadership Breakfast was could the debates change this race? Clinton leads by 5 points in national polls and 11 points in Colorado.

Possibly, but the general rule is that debates don’t change a race. However, this year doesn’t follow the rules very well. Recall that Mitt Romney beat Barack Obama four years ago in the early October debate here in Denver. But Obama went on to win the race by 5 points, largely because his strength in battlegrounds states was unshaken even while his national polling numbers slipped for a time due to the debate.

There are several reasons to be extra cautious about calling the race this year. People remain very unhappy about the direction of the country, they desire some amount of change, they’re worried about the future for their children and neither candidate is well thought of. In addition, as much of July demonstrated, this is an election highly effected by outside events, such as the Dallas shooting, the Nice terror, the Russian hacking, and unforced errors like the Comey testimony and the attack on the Khans.

The summer polls are still in pre-season. The first polls after Labor Day will be most important. If Clinton is ahead beyond the margin of error at that point after all the pollsters tighten their screen techniques to capture most likely voters, Trump is in trouble.

The first debate in late September is likely to have record viewership. Trump may need it to change the direction of the race. If Clinton is still in the lead, she will just need to demonstrate competence and confidence. She wins if it’s a draw.

Trump Back in the Weeds: Three Reasons This Distraction May Hurt Long-Term

Donald Trump simply can’t stay focused on the real job, which seems surprising for someone who has made millions in big real estate deals.

Once again, he is bogged down in a multi-day fight with someone peripheral to the Democratic campaign, the parents of a war hero. No one commenting on this election is confident in suggesting that his behavior may cause long-term damage, but the timing and the nature of the last six days of interviews and tweets appear more serious than attacks on Judge Curiel last June and his previous altercations.
Has the sheer number of fights damaged his reputation with wary Republicans and undecided voters? It’s early, but the target, length and timing of this fight make it a major distraction, and possibly the accumulation has hit a tipping point.
Posted by Floyd Ciruli at 2:09:00 PM No comments:

Email ThisBlogThis!Share to TwitterShare to FacebookShare to Pinterest
Professor Floyd Ciruli is blogging on the 2016 election. The Crossley Center and its classes in public opinion use the blog posts as a teaching tool. They also provide an online dialogue and material for speeches, presentations and media interviews.

The following are the latest election blogs with a Colorado perspective.
Posted by Floyd Ciruli at 10:45:00 AM No comments: 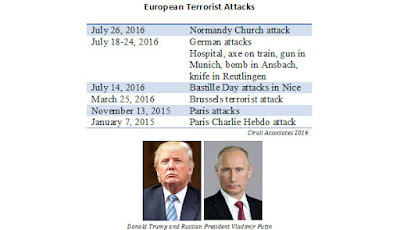 National media outlets are beginning to publish daily forecasts, which combine national (and sometimes state) polling with other data (economic, historical, political trends) to offer a statistical prediction as to the winner of the presidential election. Also, several political websites provide an aggregate of the latest surveys, sometimes simply averaging the means and other times using a variety of factors to weight the polls before averaging the data.

On the Wednesday after the Democratic convention, aggregators of polling data published the head-to-head positions:

All three aggregators have Hillary Clinton up based on new post-convention polls favoring her. She is getting what looks like a bounce.

The major forecasters include not only statistical models, but also political experts (such as Charlie Cook and Larry J. Sabato) who combine data with judgement as to the strength of the candidates and campaigns,

As of August 3rd, Clinton is seen as having an advantage to win the election, and Colorado is consistently rated lean Democrat. The spread has widened since the end of the Democratic Convention due to a bounce and Donald Trump’s missteps.
Posted by Floyd Ciruli at 10:41:00 AM No comments: