Eli Stokols and Chris Hill in the LA Times

Trump’s “weapon of choice is this economic cudgel,” said Christopher R. Hill, a former U.S. ambassador to four countries. “That’s how he wants to look tough, and it’s been popular with his base. He’s not interested at all in war. He’s interested in economic warfare.”

After Denver, Stokols did a stint with Politico and the Wall Street Journal in D.C. You often see him and Hill on MSNBC. The LA Times has been building up its national and international political coverage.
Posted by Floyd Ciruli at 4:06:00 PM No comments:

Colorado’s controversial tax limitation initiative is on the defensive. The Democratic Party and elements of the business community and local government have been long opposed to the TABOR Amendment passed in 1992, during an era of Republican ascendance and strong anti-tax sentiment. Several restrictions included in it have been limited by courts, and now the Colorado Supreme Court has ruled the entire multi-topic amendment can be overturned by one counter amendment if its opponents want to take it on.

But, before there is a full-blown TABOR challenge, the newly installed Democratic legislature, with the forbearance of the new governor, propose a permanent time out of the tax revenue give back requirements, or what’s commonly called and often approved by voters at the local level as a TABOR override. Unfortunately for proponents, they have run into considerable opposition from a newly engaged Republican establishment, with former Governor Bill Owens, former Senator Hank Brown and many current officeholders, such as Arapahoe District Attorney George Brauchler, opposing the time out, especially its permanent aspects. As the 2018 election highlighted, Colorado voters tend to be sympathetic to many local tax proposals, including TABOR overrides from schools, counties, municipalities and others, but are very skeptical of state tax increases. A statewide permanent time out is likely to suffer from the same voter distrust of state government. In a confusing editorial, even the Denver Post, no friend of TABOR, did not endorse a frontal assault on TABOR or a permanent time out. It pointed out how hard it will be to organize for retaining tax dollars when the state is awash in tax revenue.

When asked about a TABOR override, while there was a lack of understanding on what exactly this ballot question would do, no one in the group supported such an effort: “Coloradans are tired of change;” we are going too far too fast;” “[Colorado] is turning into California.”

Will Governor Polis support the proposition? He tends to be risk adverse related to statewide ballot issues, and this is shaping up to be a battle
Posted by Floyd Ciruli at 4:01:00 PM No comments:

As CU President, Bruce regularly tells graduates at commencement to be prepared to take opportunities that come your way in spite of life plans or expectations. The CU presidency turned out to be a surprising, but perfect fit for his skill set and his indefatigable work ethic. His long passion for education (Metro Board, now MSU Denver, and Denver Public Schools Foundation) was melded into his passion for CU and his sense that it provided him an invaluable life foundation. He, with his life partner, became extraordinary advocates for the institution, enriching it in many ways, including adding billions to its buildings and programs.

Bruce’s and Marcy’s friends celebrated his CU run and retirement last week in Denver. I asked him what’s next, and Marcy interjected that some rest was in order. But, he pointed out there was still some transition work and that he has a few ideas for what’s next. It’s unlikely to be a quiet retirement, and Denver and Colorado are likely to benefit. 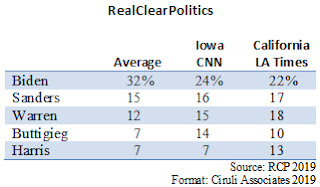 Harris still has much potential. She needs to bring her talent in the congressional hearing setting to her performance in the debates. Also, a week before Super Tuesday, the South Carolina primary gives her a powerful constituency of African American women who could put her on the top of the field. And, even a fourth or fifth position should keep someone in the race through Super Tuesday. Nonetheless, not dominating California is a disappointment.
Posted by Floyd Ciruli at 3:42:00 PM No comments: 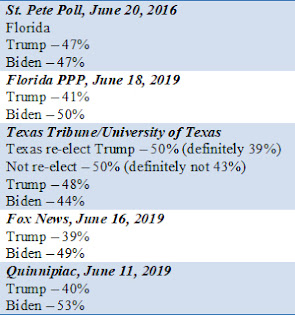 President Trump and his Mideast team – Mike Pompeo, John Bolton and Jared Kushner – should be careful starting a war with Iran. Not only is the country’s forces formidable (they are not Iraq in 2003), but American allies in this cause will be thin. In fact, except for Israel, which isn’t near the battlefield, the help is mostly unimpressive American dependencies. Europe, the UN, China, Russia, India, Turkey and others are more likely to oppose than support any action. And, of course, impact on the world economy will be immediate and significant.


The Iranian confrontation is especially dangerous due to a host of special conditions beyond our isolation on the issue:
President Trump’s usual strategy of maximum pressure and over-the-top threats will have difficulty working with Iran. It does not constitute negotiation, and regime survival will require the U.S. to appear to back down and lower the demands and threats – actions not really available in the Trump playbook.
Posted by Floyd Ciruli at 3:05:00 PM No comments: