A Long Road Ahead for Catalans

Following the September 27th Catalonia parliamentary elections, seen widely as a referendum on independence, the Junts Pel Si (JxSi) tallied up 62 of 135 seats in the Catalonian parliament, leaving them 6 seats short of an absolute majority vote. JxSí supporters have nonetheless heralded the election as a victory, with party leader Artur Mas i Gavarró claiming a win.

JxSí claims to victory may be a bit bold, pending a coalition with the reluctant leftist CUP Party, whose 10 seats would guarantee a majority vote. That said, they are not wrong in recognizing support for the movement, a cause which brought 74.95% of voters to the polls, as seen above.
The question now stands as to the future of the movement. While the election results in Catalonia show a popular trend toward independence, the central government in Madrid under Spanish Prime Minister Mariano Rajoy has taken a firm stance against the movement, and has promised to take action to block any bid for independence. This makes sense, considering the economic clout of Catalonia, as well as the prevalence of other independence movements across Spain.
Also, support in the Catalonian parliament will not translate into general popular support in the Spanish general election this December, or recognition internationally. As seen below, current opinion polls place Mr. Rajoy’s People’s Party (PP) in the lead, followed by the Spanish Socialist Worker’s Party (PSOE), both of which are against Catalan independence.

The European Union has also made it known that it does not support nationalist movements, as it struggles to maintain unity and prevent its own members from departing (ie. Greece, UK). Catalonia currently remains a long way from formal independence, however issues such as these will not disappear, as Spain and the EU continue to battle those moving toward the exit.

Crossley Scholars Gina Jannone and Chelsea Bartholomew have been selected to present a poster at the Pacific Chapter of the American Association of Public Opinion Research (PAPOR) annual conference in San Francisco, December 9-11, 2015. The poster is titled “Syria Rising: Has the Syrian Refugee Crises Shifted U.S. Public Opinion?”

Crossley Center Director Floyd Ciruli has organized a panel on the 2016 presidential election at the 2015 PAPOR conference in San Francisco.

"2016: The Year of the Outsider" examines the trends effecting national- and state-level American politics that have culminated in significant challenges within both parties in Congress and in the presidential nomination process that extols non-politicians and denigrates established politicians. John Boehner, Kevin McCarthy, Mitch McConnell, Hillary Clinton and Jeb Bush are the highest profile targets of the phenomena. Beneficiaries are the Freedom caucus in the U.S. House and the list of outsider-type candidates excelling in the presidential race: Trump, Carson, Fiorina and Sanders.

The phenomenon is not new in American politics, from Ross Perot in 1992 to the 1994 Contract with America and the 2010 rise of the Tea Party. The panel examines some of the historical and state-level origins and factors and their likely implications for the 2016 national and state elections.
Panelists: (Chair) Floyd Ciruli, Crossley Center for Public Opinion Research, Colorado; Jon Cohen, SurveyMonkey, California; Mark Baldassare, Public Policy Institute of California; Stuart Elway, Elway Research, Washington; Anthony Salvanto, CBS News, New York (invited)

Gina Jannone
Gina Jannone began her summer break by spending two weeks in Turkey on a trip co-sponsored by Korbel's Center for Middle East Studies and the Denver-based Multicultural Mosaic Foundation. The trip took 11 M.A. students on a tour of Turkey immediately following the country's parliamentary elections, which were seen as a major turning point in Turkish politics. The students engaged with political leaders, religious groups, journalists and activists on a wide range of issues, in what was a timely and illuminating experience in one of the most influential countries in the Muslim-plurality world.

Immediately following the trip to Turkey, Gina began work as a Marc Nathanson Fellow with The Aspen Institute's Communications and Society Program. Gina and a fellow Korbel M.A. student were responsible for compiling conference reading materials for the program's annual Dialogue on Diplomacy and Technology and subsequently attended the conference in early August. This year's conference was titled "Countering the ISIS Message" and featured attendees from the U.S. Department of State, non-profits focused on counter-extremism and peace-building and major U.S. technology companies such as Facebook and Google. Following the conference, the fellows produced a memorandum summary that was distributed to conference participants.

Gina is now in her final quarter as a full-time M.A. student and continues to pursue her interest in Islamic politics. She and two other students head the Middle East Discussion Group, which hosts informal, student-led events meant to foster discussion outside the classroom on issues tied to the region. Gina plans to finish her time at Korbel after the winter quarter, during which she will conduct research for a Substantial Research Project on Islamic political movements. Outside of school, Gina continues to work remotely as a senior writer and editor for the public opinion firm Rasmussen Reports based in her home state of New Jersey.

My primary role is in managing future and ongoing media partnerships, such as SurveyMonkey's partnership with NBC News. This includes:


In addition, as part of the Survey Research team, I provide survey research expertise and best practices to the engineering, sales, and marketing teams.

Chelsea Bartholomew
I spent my summer interning at The Markaz, a Los Angeles nonprofit dedicated to showcasing the arts and cultures of the Middle East and North Africa. Her duties were varied, ranging from researching and developing new fundraising strategies and assisting in the rebrand that the organization underwent to helping to plan, promote, and oversee an assortment of educational and artistic events. The latter included a documentary about the origins of the Israeli-Palestinian conflict, a Middle Eastern jazz concert, and a comedy show highlighting comedians of Middle Eastern and North African origin.

This fall, I switched coasts to participate in Korbel in D.C., the Korbel School's semester-long program in Washington, D.C. The program allows students to take several evening classes and pursue an internship during the day. I intern with the Department of State's Bureau of Near Eastern Affairs, an opportunity which hopefully will provide invaluable insights into the considerations that go into the crafting and implementation of U.S. foreign policy towards the Middle East. I will return to Korbel in January and graduate in the spring.

Welcome to the Crossley Center Blog

We strive to understand the world through public opinion research. 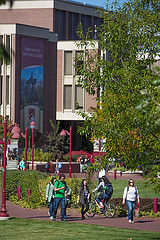 Our research and learning center at the University of Denver’s Korbel School of International Studies expands knowledge of public opinion and its uses. With our blog, we provide a forum for students and faculty to post our perspectives on key domestic and foreign policy issues.

By applying data from leading survey research centers, we delve into international public opinion to better understand the views of other countries and cultures. We also analyze American public opinion as it relates to foreign policy, and the ways in which it influences the foreign policy debate.

Our goal is clear-cut, but complex: To think globally and put scholarship into practice for the global public good. Follow us on our journey of interpreting the views of people throughout the world through public opinion research.
Posted by Floyd Ciruli at 3:44:00 PM No comments: