Ambassador Christopher Hill and Professor Floyd Ciruli reprise their popular post-election analyses of the November results and its domestic and international effects on November 7 in Maglione Hall.

The post-election session will review the midterm results, the possible end of one-party control of the federal government and the likelihood of impeachment. Also, the impact, if any, on America First, and President Trump’s trade, immigration and alliance policies. How will the results align with international trends of populism, nationalism and authoritarianism? 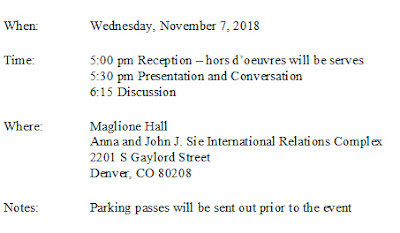 REGISTER here
Posted by Floyd Ciruli at 11:42:00 AM No comments:

Although President Trump likes the rally chant, “lock her up,” aimed at women he finds irritating, such as Hillary Clinton and Dianne Feinstein, it’s Trump who may be locked up (figuratively) after November 6. History and polls confirm what Trump himself argues, this midterm election is all about Trump. And, if Democrats take the House, they will have a mandate to restrain what I call the “Authoritarian Presidency” (see blog Authoritarian Presidency).

Trump’s and the Republicans’ main election weakness is the desire of a plurality of voters to put up restraints on his presidency, not encourage it. Of course, that corresponds to decades of experience where it’s the out-of-power party that is most motivated to containing newly elected presidents, such as Ronald Reagan in 1982, Bill Clinton in 1994 and Barack Obama in 2010.

The second problem for Republican candidates is that the swing voters who have reservations about Trump aren’t in a revolt over policy, but his personality. In other words, citing accomplishments and the great economy is undermined by his relentless disruption of the status quo and need for attention expressed in endless commentary, interviews, announcements and tweets (72% say he Tweets too much, 58% of Republicans, Politico, 5-18)

Hence, the 2018 midterm is either going to be an extraordinary victory for Trump if the Democrats fail to take the House or the beginning of “locking him up.”

Q: [Respondents who disapprove of the way Trump is handling his job, N=499] Is your disapproval of Trump’s job so far driven more by the positions he takes on issues or more by his personality and leadership qualities? (CNN/SSRS)

As Richard Nixon faced his Watergate accusers after his landslide 1972 re-election, critics had already established an intellectual theme, the Imperial Presidency, that appeared in scholarly journals, books and guest editorials. It urged action to tame his administration’s behavior.

After his resignation and pardon, the 1974 midterm elections brought 43 new Democrats to the House and three more to the Senate, setting the stage for new legislation to constrain the Nixon administration’s long described rogue behavior. The War Power Act was passed (before the resignation), along with dozens of laws related to elections and abuse of power, such as the Federal Elections Commission and Freedom of Information Act. To help strengthen congressional oversight, the Congressional Budget Office was created. The growth of presidential power was slowed.

Similar to the 1970s, an entire publishing industry has been established critiquing President Trump’s abuse of power and danger to democracy. Google the term “Trump and fascism” or “authoritarianism” and see dozens of citations to popular and academic references. The intellectual framework is in place to limit the Authoritarian Presidency. If the Democrats win the House in the 2018 midterm, it will reflect a desire by voters to put some side rails on the Trump presidency. Discussions have already begun about which House committees would be involved, what issues addressed and the timing and process to follow.

Reporter Jeff Barker in the Baltimore Sun, hometown paper of Elijah Cummings, described the 22-year congressional veteran who could replace retiring Republican Trey Gowdy as Chair of the powerful Oversight and Government Reform Committee, which was a scourge of the Obama administration under Darrell Issa and now works equally hard to protect Trump

Cummings, as a ranking minority member, has already requested subpoenas for subjects related to immigrant family separation, security clearances and patient protection, such as pre-existing conditions. A few of the topics discussed among staffs and members include:

One issue the Cummings and Democratic House leadership wants to avoid is impeachment. As I told Barker:

“The risk of talking about impeachment is to scare off moderates, suburbanites, independents who would like a little relief from the level of bitter partisanship and the unbelievable gridlock,” said Floyd Ciruli, a Colorado-based independent pollster. “Their problem is, Mueller may come in with true high crimes and misdemeanors.”

If Mueller presented impeachment-worthy evidence, Ciruli said, the Democrats could get dragged into a debate “in spite of their leadership.”
Posted by Floyd Ciruli at 2:02:00 PM No comments: