Populism was the primary topic in International Public Opinion and Foreign Policy graduate class during fall 2016. The American presidential election, the rise of nationalism in the EU, the failure of the Colombian peace treaty vote, and the crisis of the Renzi government in Italy were among the topics taken on.

A sampling of a 300-word blog assignment from three graduate students follows. The blogs focused on public opinion, polling, including its failures, and the populist theme. The blog format was chosen because their growing popularity for political news and commentary. Students read them for much of their politics, and student writing should include publishable work in a popular modern medium.

Conflicts of Interest: Nationalism and the EU
By Daniel Durbin

Recent elections in Europe have seen a rise in nationalist and right-wing parties that generally favor less EU integration and more independent states. However, it is important to note the differences and similarities between the rise of the far-right and growing Euroscepticism. 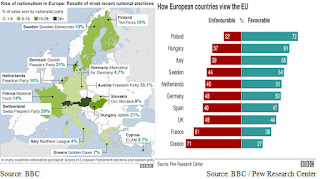 Polls have shown an increase in Euroscepticism throughout the EU, with a Pew Research Center Report in June finding only a small majority of 51% favoring the EU, and 42% wanting more national power across 10 countries (source: BBC News). The graphic above shows a detailed view of the favorable/unfavorable breakdown amongst the countries.

Closely linked to the rise of the far-right is the rise of unfavorable opinions relating to refugee and immigration policies. As shown by the Pew Research Center, many European countries express concern over refugees entering their country, with many linking this fear to a concern of domestic terrorism (Source: Pew Research Center).

Poland is an interesting case, due to its highly favorable view of the EU and its views on refugees. Jaroslaw Kaczynski, the leader of the right-wing Law and Justice Party, calls for reform within the EU and disputes policies including those related to immigration, but refrains from calling for a split, due to broad support from Poles likely linked to the EU’s aid for agriculture and infrastructure projects (Source: Reuters).

On the other end, France should be a major concern, due to its unfavorable view of the EU and its mixed view on refugees. The upcoming presidential election could decide the future of the European Union, especially since National Front leader Marine Le Pen has unsurprisingly maintained a position of leaving the EU if elected (Source: Bloomberg).

So while it is fair to connect dissatisfaction with the EU to immigration and the rise of nationalism, it isn’t always the case that the two are completely joined. Other factors, including economics and social issues, should be explored to determine other root causes.

On September 26, 2016 the Colombian Government signed a peace deal with the Revolutionary Armed Forces of Colombia (FARC) ending the 52 year civil war and earning President Juan Manuel Santos the Nobel Peace Prize. Then the unexpected occurred; although polls showed strong support for the Colombian peace referendum, with an average of 61% of Colombians in favor of the deal, when the results came in, 50.2% of the population had voted against the deal. How did pollsters get the results so wrong? 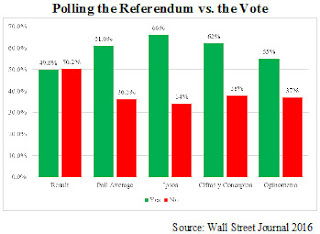 Polls were concluded shortly after the peace deal had been signed and nearly one week before the referendum vote. During this period, opposition candidates, led by former president Álvaro Uribe, stoked public fear of a FARC political party pushing Venezuelan-style socialism, demanded jail time for FARC “terrorists,” and drew upon high levels of resentment towards President Santos’s social policies to gain support for the “No” vote.

Additionally, voter turnout was particularly low, at only 37.4%. Low turnout was driven by several factors including Hurricane Matthew hitting Colombia’s Caribbean coast and concerns over electoral violence. It is important to note that voter turnout was lowest in areas with greatest support for the peace process and highest were strongly opposed. Furthermore, 1.97% of total votes cast were invalidated, leading some to question the validity of the results. Higher turnout or less invalidations could easily have shifted the outcome. 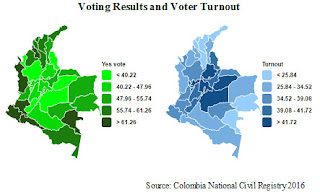 With the referendum failed and the ceasefire ending on October 31st, Government and FARC officials return to the deliberations in an attempt to find a settlement. Although FARC officials have said that they are unwilling to change their stance, they need to find a negotiated settlement with the Santos administration before the end of his term and a potential swing of Colombia’s political pendulum to parties less willing to negotiate for peace.

Colombian President Juan Manuel Santos has extended the FARC ceasefire until December 31. But is it enough time to reconcile a divided country?
By Clay Howarth

What happened?
Polls predicted a comfortable victory for Santos and his peace deal with the country’s largest rebel group. Yet, much to the chagrin of the deal’s supporters, the major pollsters were utterly wrong. The deal was defeated 50.2% to 49.8%, a margin of 54,000 votes. 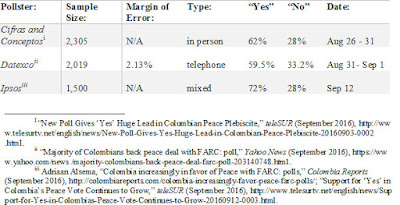 What went wrong?
Two explanations inject some reason into the post-referendum confusion. In the weeks leading up to the vote on October 2, those who expressed opposition to the deal were lambasted by mass and social media, which labeled them “enemies of peace.” The polling agency Ipsos, which relies heavily on face-to-face interviews for its data, believes the lack of anonymity greatly skewed its predictions1.

Secondly, the government prohibited polling after September 27, meaning that polls missed critical late swings, including the public reaction to the ceremonial signing of the deal in Cartagena on the 26th. As Andrés Pérez of the polling firm EcoAnalítica conveys, “Opponents felt angry that their views were being slighted, and supporters felt they didn’t need to vote because the agreement had already been signed2.”

Real divide?
As illustrated below, the country’s center tended to vote “no,” while the periphery, including Colombia’s indigenous populations whose communities have suffered disproportionately, sided with Santos3. 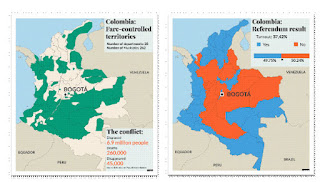 With the extended ceasefire, former President Álvaro Uribe and his “no” faction want a deal that emphasizes retribution. However, indigenous leaders, suspicious of the role paramilitaries played in intimidating “yes” voters, are already planning to implement the deal regardless4.  With such a wedge driving Colombians apart, an agreement being reached by the end of the year seems optimistic at best.