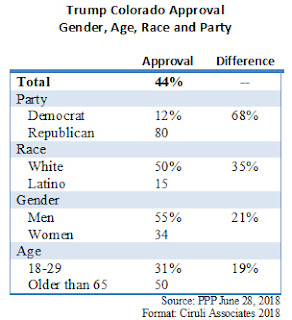 Finally, the age polarization between Millennials and seniors is dramatic. Trump draws support from older voters (50% approval), but has little from voters 29 years old and younger (only 31% approval), a 19 percent gap.
Posted by Floyd Ciruli at 1:02:00 PM No comments:

Although as Julie Turkewitz reported in the New York Times shortly before the primary, the question is “just how far left this frontier state wants to go,” Jared Polis, the perceived “far left” Democratic nominee, begins his campaign in a good position. He is running in a state that has moved left the last decade, in a year Democratic enthusiasm is high and against a Republican nominee burdened with an unpopular president.

Polis’ campaign proposals are expensive and his 10 years in Congress will provide a wealth of
information for opposition research. So, a tough, in the trenches campaign can be expected, but as reported in this blogsite, The Buzz, the voter registration, party enthusiasm and presidential approval favor the Democrats.


Polis has never had a competitive general election where his reputation, political record and platform are truly tested. In spite of the Democrats’ 2018 advantage, Colorado remains a state with persuadable voters. Can the Republicans mount a campaign that makes the governor’s race competitive?
Posted by Floyd Ciruli at 12:53:00 PM No comments:

Benson Goes Out on Top

When asked, Bruce Benson thought he was probably the oldest college president working today. When he started his job ten years ago, he was among less than 5 percent of college presidents 70 years of age. Now, he’s among 11 percent. The job is tough, and colleges try to keep their successful presidents. Benson also represented the trend of non-academic college leaders skilled in state politics and fundraising.

Benson decided after 10 successful years to retire. CU has had an astonishing run under his decade of leadership. New buildings flood the four campuses. The Anschutz Center has become the tech center (bio) of north Aurora.

In a blog posted in January, I noted he had hit his second five-year mark and hadn’t slowed down. From 300,000 Twitter followers, to prodigious fundraising (a Benson specialty), he kept up the pace.

Benson’s CU activities have been just one of his life projects. As president of the Denver Zoological Foundation, he led the master plan build-out and his leadership of the Denver Public Schools Foundation was one of the key elements in initiating the District’s reforms and improvements. After his first 5 years, Benson was asked as he considered a second 5-year term as president: When would it be time to retire? With his usual uncompromising candor, he said:

“…seven, maybe it’s four,” he said. “You get older, you start sliding – am I as coherent as I was 10 years ago? No. Do you forget names more easily? Yes. But if I start slipping, I’m going to be the first one to notice it, and I’ll say, ‘Hey, guys, I’ll give you a year – you’d better find somebody else.’”

Benson’s energy calls to mind another hardworking Coloradan. His old political rival Roy Romer. Romer was 70 when he took over Los Angeles Unified School District, a seemingly impossible job, which after six years, he also received wide acclaim. The two of them made 70 look like the new 50.

Benson mentioned his wife, Marcy, in his retirement letter. She has been his partner and handles a host of causes herself. Colorado and CU has been very fortunate to have the energy of the Bensons.

Good luck on your next project, Bruce.

Webb, Big Smile, Is Still Optimistic About the Human Condition

Wellington Webb, 77, described his life and philosophy in a long Colorado Politics profile by Ernest Luning.

Webb, a tall, thin kid from Northeast Denver, always played above expectations. In his two toughest elections against Norm Early for mayor (1991) and Mary DeGroot for re-election (1995), he came from behind and beat the odds. One of his best assets was a great smile with an even public temperament. Webb puts people at ease, even while he’s promoting his loyal Democratic agenda and progressive politics.

Denver has been gifted with a long run of progressive, but pragmatic mayors, who, starting with Federico Peña in 1983, have used Denver’s landlocked but considerable assets to overcome white flight, old infrastructure and weak economies that have damaged so many core cities.

Webb inherited a new airport that he finished and opened. He managed the planning of Lowry and Stapleton, and most importantly, he vigorously promoted the Central Platte redevelopment with residential, commercial, recreation and just relaxing open space. These are major legacy projects.

Webb’s 12-year term from the early 1990s to the early 2000s was among Denver’s most productive. I said in the article “that disputes surrounding Webb’s administration have faded over the years.”

“The reason Denver isn’t a Cleveland or St. Louis or Detroit — a city that absolutely struggles — is we had a series of mayors who exceeded expectations and moved the city along,” Ciruli said. “Webb definitely pushed this city along to where it is today — one of the fastest-growing, strongest economies in the country. I put him in that pantheon of really great mayors this city has had.”
Posted by Floyd Ciruli at 1:37:00 PM No comments:

Some Observations on the Mexican Presidential Transition

In an interesting presentation at the University of Denver sponsored by WorldDenver and the Latino Leadership Institute and moderated by former Senator Tom Daschle, it was observed that President Trump has divided America and united Mexico. They believed, due to Trump, America has lost its moral authority to call governments or others to account for corruption, conflict of interest or human rights violations.

The discussants speculated Trump and the new Mexican President Andrés Manuel López Obrador (AMLO) would likely end up in a confrontation, although they have started off on a positive note. I disagree. Although each president may criticize the other, mostly for domestic consumption, they are, in fact, similar in a variety of ways.

They are both nationalists and primarily interested in domestic issues, especially their respective economies. Trump and AMLO share a desire to raise Mexican worker wages. Trump’s interest is to create a disincentive for jobs to move to Mexico. 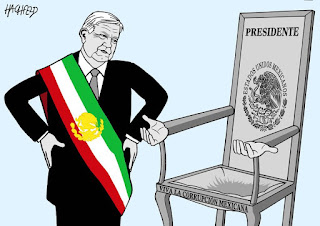 AMLO is likely to intervene in the economy as vigorously as Trump. AMLO’s super majority makes him a strong man with an authoritarian attitude. Trump’s favorite leader.

They both salute sovereignty and are unlikely to have a great deal of interest in other countries (e.g., Venezuela) or each other concerning “internal matters,” such as human rights.

My prediction is Mexico will ignore much of the bluster from D.C. and will instead work hard to maintain the positive economic aspects of the relationship. However, security issues, especially related to drugs, human trafficking and immigration, will likely remain the hot spots.

One note: The election devastated the PRI, the old historic governing party. It may not revive. MORENA, AMLO’s party, inherited many of the PRI voters and interest groups. The PRI is the heart of Mexican clientelism and government corruption. How does AMLO stop the corruption when he and his party have become the boss?

Read Crossley blog: López Obrador will win and Mexico will lose
Posted by Floyd Ciruli at 12:41:00 PM No comments: 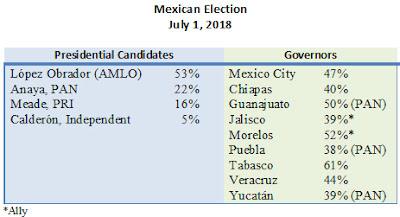