Pollsters Present “Year of the Outsider”

Some of the West’s top pollsters gathered in San Francisco to participate in a panel discussion organized by Floyd Ciruli, director of the Crossley Center for Public Opinion Research at the University of Denver. The discussion, titled the “Year of the Outsider,” was part of the Pacific Chapter of the American Association of Public Opinion Research (PAPOR) annual conference, which brings together public opinion professionals in the West.

The group presented data from California, Washington State, Colorado, and nationally on the political outsider phenomena that is having so much impact on the 2016 presidential race. 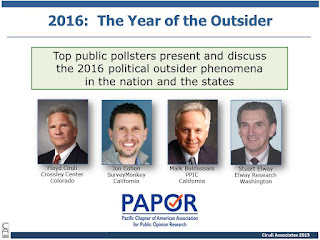 Colorado has a long history of liking candidates with outsider credentials. Ciruli spoke about that history and placed the phenomena in historical and public opinion context.