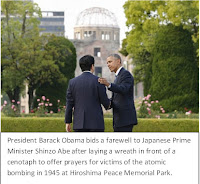 Reduction of nuclear stockpiles and non-proliferation were among Obama’s top goals. Outside of his agreement with Iran, it has been one of his biggest disappointments.
Posted by Floyd Ciruli at 10:23:00 AM