Afghanistan: A Decision That Both the Public and the Base Dislikes

The Afghanistan decision may have been President Trump’s most difficult. He did not want to raise the ante in what looks like a losing proposition. He has railed frequently on how poorly it’s been handled and how we should just get out. But after weeks of wrangling with the Pentagon and the generals in his administration, he went with their recommendation for more time and troops.

He only made it only after a long meeting at Camp David with his full national security team. 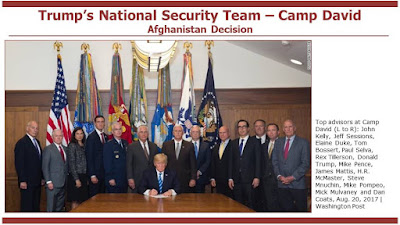 While he gave a speech as to why he went against his preference, he was vague as to what exactly was committed. But Trump’s instinct on ending America’s participation in the Afghanistan war is in alignment with a plurality of public opinion and his most ardent supporters of the Steve Bannon wing of the base. In fact, Bannon’s exit from the White House was expedited by his resistance to the military’s recommendations on Afghanistan. 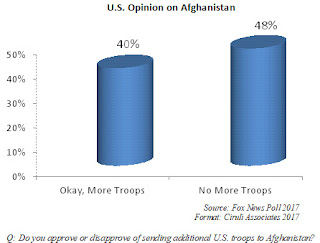 Although Republicans supported Trump’s decision, with 66 percent among whites with no college degree (4-year), only 48 percent agreed with nearly two-fifths opposed (39%).
Posted by Floyd Ciruli at 4:06:00 PM