The ruling party is in a battle to hold power. President Enrique Peña Nieto, after a difficult five years, is working to pass along the presidency to his party, the PRI (Institutional Revolutionary Party). After monopoly political power in Mexico for most of the 20th century, they lost control to the center-right PAN in 2000. They returned to the presidency in 2012 with Nieto and don’t want to lose it again. 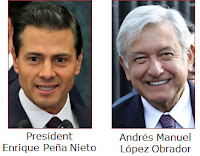 PRI is fielding candidates to see who is strongest against expected frontrunner, former socialist mayor of Mexico City Andrés Manuel López Obrador. PRI Finance Minister José Antonio Meade is the current preferred candidate. In a late November poll, he was only 5 points behind López Obrador, 28.7 percent to 23.2 percent (GCE).

Except for López Obrador who has near universal name identification, most of the field is unknown to voters. Barely a third of voters could identify Meade. López Obrador has run twice before for president, getting close in 2006 and refusing to concede. He was labeled the Hugo Chávez of Mexico, but is currently running a more moderate-sounding campaign focused on corruption and Mexico’s self-sufficiency. Like Donald Trump, he’s not a fan of NAFTA.

Early polls show him ahead of a multi-candidate field (6 to 10 candidates offered) by 5 to 15 percentage points in a first past the post no run-off system. Nieto won with 38 percent in 2012. López Obrador has indicated he might add a socially conservative party to his coalition in a quest for a plurality. He is likely at least 5 to 10 points short of the 35 to 40 percent needed to win. 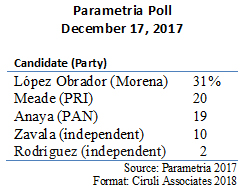 Independents will be allowed to run in the July 1 election for the first time. They are entering the race, including former First Lady Margarita Zavala (PAN President Felipe Calderón’s wife) and Nuevo León Governor Jaime Rodríguez.

PRI (Institutional Revolutionary Party) of current President Enrique Peña Nieto will hold a convention in March. The major parties must offer their candidates by March. PAN (National Action Party) and PRD (Party of the Democratic Revolution) are considering a coalition and options for candidates. Candidates could be Ricardo Anaya Cortés, former PAN leader. Morena (National Regeneration Movement) was created by López Obrador. He has produced a 400-page manifesto to fight corruption and run his government.